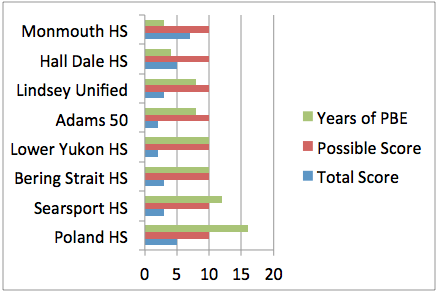 Reprinted with permission from: http://nhfamiliesforeducation.org/content/maine-state-board-education-member-speaks-out-against-competency-based-education

My name is Heidi Sampson, I am a member of the State Board of Education in Maine. I am in no way speaking for the Maine SBE, but as a concerned citizen who has a vested interest in NH.  I wanted to share information with the New Hampshire Legislators on the Competency Based Education model now being implemented in the New Hampshire Schools.  Maine has been engaged in the same transformation although in Maine it’s called Proficiency Based Education.  The name is different but the problems will be the same because both models are based on the old and failed Outcome Based Education model which is part of the national redesign in public education.

As you move forward with legislation on Competency Based Learning and Assessments (HB323) it’s important to have this foundation of knowledge and history to carefully analyze whether you or your constituents really want this model in their local public schools.  Ask yourself, when did any of your parents demand your local public schools transform to the old, failed Outcome Based Model?  Chances are they did not.  The driving force behind this educational transformation is the Nellie Mae Foundation.  They heavily funded Non Profits in Maine to carry their water.  Great School Partnership got its start with Nellie Mae grants for their first 2 years.  Contracts have indicated a sizable fee with no deliverables identified. Currently the legislature is considering a bill to repeal the mandate to implement Proficiency Based Diplomas.

In Maine we began the process in earnest toward Proficiency Based Education that is identical to Competency Based Education. It was introduced on a large scale with the pilot program, Reinventing Schools Coalition (RISC). RISC was initiated in Alaska and implemented in California and Colorado.  Their results have been nothing stellar, no evidence of academic improvement was apparent. In fact, many, many, three year comparisons showed downward trends in Math, ELA and Science at all grade levels.  I have included a chart below from the pilot schools as well as some forerunners in Maine.

RISC has morphed into MCL (Mass Customized Learning) prior to the states adoption of the Proficiency Based Diploma mandate LD 1422 which passed in 2012. All these approaches have the same philosophy in common.  This is nothing new and has been around for generations being soundly rejected as a failure every time.

Outcome Based Education decades ago was the last big push to change the nature and outcomes of our public education.  It destroys traditional education, its methods, curriculum, and its means of assessment, time frames and goals. The Competency-Based model will only teach students what to think, not how to think. It will necessarily lower the bar in an attempt to equalize outcomes… and that never works.

Competency/Proficiency are such a palatable words.  Of course we want children to be competent or have competency or be proficient.

The average citizen understands what these words mean; a high aptitude, to have expertise, knack or know how, to be highly skilled, talented and very capable.

BUT what do the proponents of this effort really mean by competence/proficient?

First, it is critical to understand an important distinction:

•  Competency relates to attitudes, responses, behaviors or actions easily scored on a machine.

These are not the same, yet we are led to conclude they are synonymous?

The word selection is deliberately designed to neutralize the unsuspecting public and even legislators, so it will be embraced.

So, what about where it has been tried? After billions of dollars and tremendous upheaval to school systems both large and small, the reformers have failed to deliver what they claimed. In fact, the failures were so complete that the systems were dismantled. This has happened in individual schools, districts, cities and states across this country. It happened in other countries.

It’s a challenge to keep up with all the changes in Maine education since our own Reform Act of 1984 and all of the ramifications of the federal programs; America 2000, Goals 2000, No Child Left Behind and now the infamous Race-to-the-Top. The consistent federal interference has not helped our state.

There is no middle ground with the move away from a time and [Carnegie] unit based system.  Schools have been moving away from teaching academics toward skills training – for workforce labor. Workforce development has nothing to do with self-selecting career choices and building a resume to that end.  Workforce labor development is a pre-selected path based on external information, not driven by a student’s dreams, desires or determination. This teaching model is a departure from Classical Approach for Education to BF Skinner’s Behavior Modification model of education.

If an expectation is not met, a child must repeat the drill again and again until they meet the predetermined outcome.  No need to prepare and no need to strive to do better; just do enough to get by and move on to the next standard. Subject matter will be broken down and compartmentalized.  A set of pre-determined expectations are the gate keeper to moving to the next compartmentalized subject matter.  No need to prepare; they just need to know how to properly respond by hitting the correct button.  This will enforce compliance.

Does this sound like the development of creative, innovative and independent thinkers? Or does this sound more like training pigeons?

Does this sound like we are creating competitive opportunities for them? Please consider this:

•  Students who can manage the pressure of competition will succeed and thrive with the future challenges they will face.

The incessant, constant testing of each tiny, segregated standard has disemboweled every subject matter.

•  Learning is not linear!

•  The whole picture is lost to them.

•  Truth and knowledge are irrelevant.

•  A child’s behavior, attitude, belief system and attributes will determine a child’s ‘value’  as human capital for the global labor market.

A premium is set for a student to know how to respond to a series of questions not what is of value and substance. The former is a subjective (opinion based) assessment; the latter is the only quantifiable (factual) assessment.

Like a rat navigating a maze in a lab, children are expected to navigate the useless information with a mouse to complete their test on time.

Behavior modification has nothing to do with true education, that of acquiring knowledge, using logic, or assessing truth. But this is the focus in education now, especially with competency based education.

There are indications students are learning less.  I’ve included two sample High School Physics Exams.  At one school (a forerunner for PBE), this year’s Honors Physics seniors took a 2007 pre Proficiency Based Education basic-level Physics exam and most were unable to pass what the lower level class was able to complete 8 years ago.  (See attached example of physics exams)

Maine’s Education and Cultural Affair Committee commissioned a 2 year study to be conducted on this issue.  David Silvernail and the USM Center for Education Policy, Applied Research, and Evaluation posted their work April 30, 2014 titled Implementation of a Proficiency-Based Diploma System: Early Experiences in Maine. Although this work was funded by the Nellie Mae Foundation, which strongly advocated for proficiency based education this report is not a glowing report. There evidence of success is lacking:  “After an extensive review of the literature, it became evident that, while there are many conceptual pieces describing what a standards-based or proficiency-based education system should look like, there are few existing conceptual models that envelop all of the requisite elements for successful implementation. Furthermore, there is limited empirical evidence of the effectiveness of these systems, which has resulted in school districts having little historical information and no clear evidence to guide them in developing the new diploma systems.” (pgs. 16-17).

From a strictly objective scientific evidence piece of research, it would be necessary to have a separate study conducted that is not funded by Nellie Mae, the Gates Foundation or Educate Maine.  All these organizations are self-propagating and the public is not receiving evidence that is unbiased or will help to further the cause of the funding organizations. If this system was highly ineffective, with the current studies, we would not discover this until it is far too late.

In Maine over 100 districts are not prepared to properly implement the mandated Proficiency Based Diploma system and have therefore filed and received extensions. It seems a logical conclusion to assume the legislature was misled during the passage of LD 1422.  This is not a surprise as they were only allowed to receive one perspective; only the potential of an unproven system.

Now that we have been able to evaluate the policy closer and have had time to speak with stake holders; teachers, parents, students, college admissions personnel and special education professionals, we now have a much clearer picture of what a Proficiency Based Diploma system brings.

“Our data suggest that an additional issue with local translation of external standards and state-level legislation was evident in the lack of consistency in the definition of key features necessary in developing and implementing proficiency-based diploma systems”. (pg. 49)

The fact that curricula would have to change is another area that should be examined. School Boards are to a great extend completely unaware of what this is all about.  In many Maine districts, the School Boards have approved “A Concept” which has given the administration; cart-blanche approval to bring in anything and everything without any accountability.

If you want a system where teachers can teach and students can learn, imposing a learning culture and curricula based on an unproven ideology further clouded with problems of interpretation and implementation only complicates the goals.

We have now invested years in this experiment, with years to go; years of continued interruption and false hope for the parents and students. There will be more talks, presentations, demonstrations, slide shows and testimonials aimed at convincing us that we are on a path to improvement. But in the end, after the money is spent and changes have been made, after school boards and legislatures have changed, we’ll discover what so many others did.  Our Proficiency-Based model will collapse under its own weight. We can wait for that inevitability or we can do the right thing now.