Here are some resources we have produced and used at various times.

2016 Convention Flier: On the B&W version you can now type your name into the box and then print them out.

For color, print out 1 copy on a high quality setting or laser printer. Then print your name on a piece of paper in various small font sizes. Cut one out that will fit into the “Paid by _____” space and then tape it there with clear tape. Now make copies of the flier. (For a color copy click here_Color)

NCLB vs ESSA Side by Side Comparison

2014 Convention Flier: There are rules governing passing out fliers that seek to influence elections. You should write “paid for by [your name]” at the bottom of the flier before copying in bulk and passing it out.

Core Action: This flier is great for passing out at events so that people have an action list of what to do. It’s titled “So I know I don’t like Common Core, but what do I do?”

RNC flier: This is a flier of the Republican National Committee resolution that passed unanimously in April 2013, condemning Common Core for it’s violations against the RNC education platform and other concerns.

The Precinct Flier: This flier is for passing out to neighbors. Please contact the county coordinator for your county and volunteer to be a precinct captain and get these fliers to everyone in your precinct.

The 16 page Legislator booklet: Titled, “What the State Office of Education Isn’t Telling You About Common Core”

The Red Flier : This was our first flier which was passed out at a few county conventions and then mailed to all state GOP delegates and passed out to some delegates at the Democrat’s Utah convention. It shows three Utah leaders signing to bind us to the Smarter Balanced Assessment Consortium, Governor Gary Herbert, Superintendent Larry Shumway, and State Board President Debra Roberts.

This chart (click to enlarge or get this pdf of it) illustrates how Common Core doubles-down on No Child Left Behind. 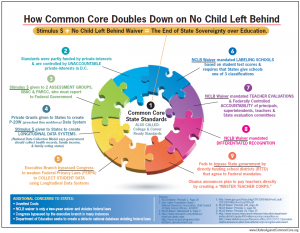 Ask Yourself a Few Questions About Common Core

GOP State Convention Flier – Back Side

Common Core Fact Sheet – Back Side