If you have been following the Common Core movement, you know that it was the Gates foundation that pushed for and funded the creation of the Common Core standards by pumping nearly $20 million into the National Governors Association and Council of Chief State Superintendents Organizations. It is the goal of the Gates Foundation to create a global education system, but beyond that, they are involved in some very invasive classroom technologies as well.

High Tech Biometric Bracelets to Be Worn by Teachers and Students

The Bill and Melinda Gates Foundation has just granted Clemson University $498,055 to work with members of the Measuring Effective Teachers (MET) team to measure engagement physiologically with Galvanic Skin Response (GSR) bracelets.  Students and teachers are to wear these devices to measure excitement, attention, anxiety, boredom or relaxation in order to measure teacher effectiveness. Read more…

The Bill and Melinda Gates Foundation gave a grant for $621,285 to the National Commission on Time & Learning to study the electronic bracelet and functional MRI’s for children. Functional magnetic resonance imaging, or fMRI, is a technique for measuring brain activity. It works by detecting the changes in blood oxygenation and flow that occur in response to neural activity. It is non-invasive, safe for the subject and easy for the experimenter to use making it a popular tool for imaging normal brain function – especially for psychologists. Read more…

(Update: 5/6/13 The Gates Foundation has taken down the link above. Here is a screenshot of the page they have removed. Click to enlarge.) 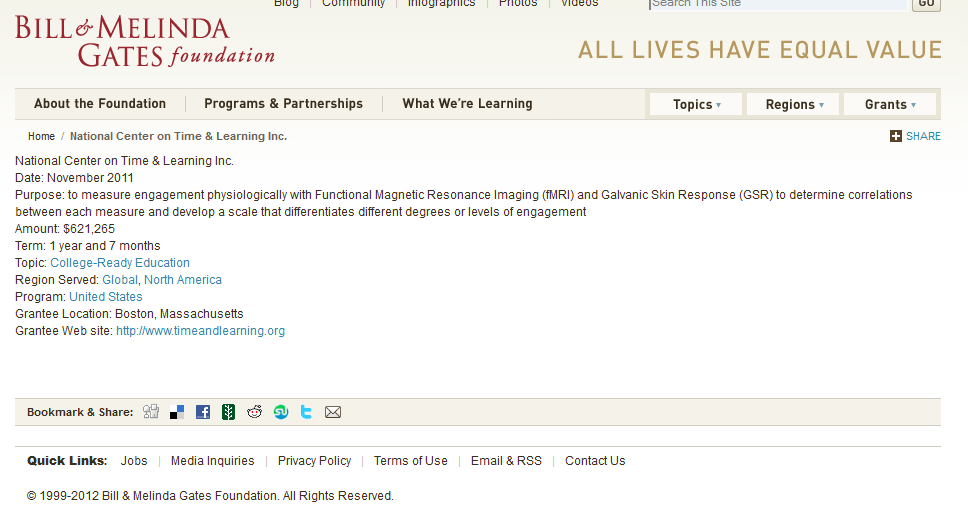 Described as an electronic “tattoo”, the device is a wearable patch of circuits, sensors, and wireless transmitters that sticks to the skin like a temporary tattoo. It can be placed over an existing tattoo to minimize attention. Electrical signals from the brain and skeletal muscles transmit the information wirelessly to an external computer. “…efficient union(s) between brains and machines is a central theme of (Todd) Coleman’s research and he envisions endless applications in areas such as military operations, gaming, education…” Read more…

Gates Sponsored Organization Urges Dept of Ed to Increase Learning Time at School in Order for Districts to Qualify for Race to the Top Grants.

“The National Center on Time & Learning (NCTL) submitted a very detailed comment on the Department of Education website urging the Department to incorporate expanded learning time in the upcoming round of Race to the Top, which is focused on individual school districts as opposed to states.”  http://www.timeandlearning.org/race-top-recommendation

Teachers to be Videotaped During Class Along with Wearing Biometric Bracelets

“The goal of the (Gates Foundation) MET project is to improve the quality of information about teaching effectiveness available to education professionals within states and districts—information that will help them build fair and reliable systems for teacher observation that can be used for a variety of purposes…This information will include videotaped classroom observations, student surveys, tests of teachers’ pedagogical content knowledge, and analyses of student assessment data to examine achievement gains over time.”

Texas: Students Will Be Tracked Via Chips in IDs
Northside Independent School District plans to track students next year on two of its campuses using technology implanted in their student identification cards in a trial that could eventually include all 112 of its schools and all of its nearly 100,000 students. District officials said the Radio Frequency Identification System (RFID) tags would improve safety by allowing them to locate students — and count them more accurately at the beginning of the school day to help offset cuts in state funding, which is partly based on attendance. Read more…