Unbelievably, more teachers in Alpine School District continue to violate Utah election law and Alpine School District policies (See previous 1, previous 2). At this point, who knows how many schools this is happening in. Highland City Council member Rod Mann posted the below emails which he obtained, to Facebook over the weekend. He gave me permission to reprint his letter which was sent to the Lt. Gov., Utah county clerk, and ASD Superintendent Vern Henshaw. His letters are below these letters from a fourth grade teacher at Meadow elementary showing clear violations of the law.  It seems clear that the principal and other administrators must also support these actions as she wrote the names on the faculty lounge whiteboard for everyone to see. Further, after sending out an email to the rest of the school on the 21st, she continued to send emails on the 28th and 30th. The failure of the principal to stop this action shows she was complicit with the actions of this teacher.

The Lt. Governor’s office, 800-995-VOTE, write him at: http://www.utah.gov/ltgovernor/contact/, spencercox@utah.gov

and ask your ASD board member how such violations of election law and district policy are handled.

Seems to me that this is an institutionalized method for electing rubber stamps to the board. There is only one solution. Enforce the law, and enact partisan school board elections so that locally elected representatives can vet candidates for inclusion on the ballot and not let the establishment run the campaigns of selected candidates using taxpayer dollars.

Please help get out the vote for Wendy Hart, Chris Jolley, and Maynard Olsen tomorrow. They will represent the public interest. 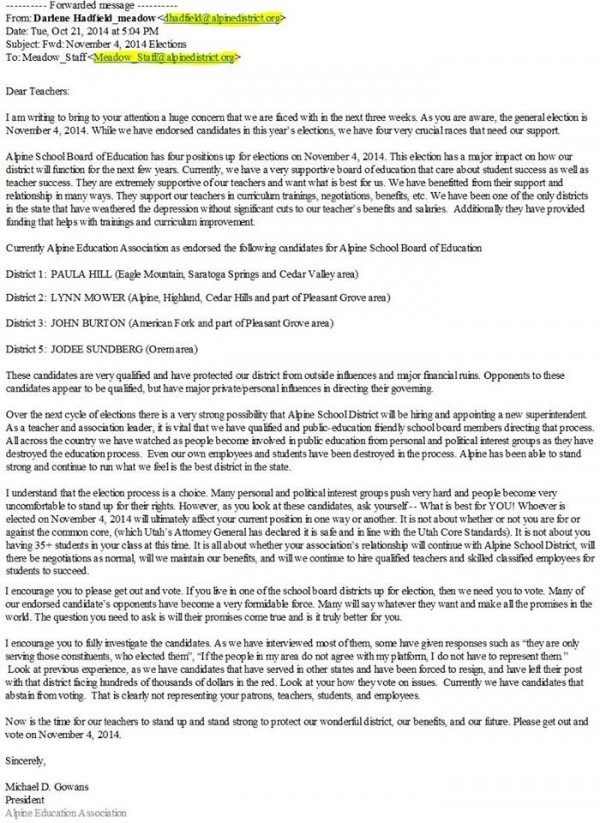 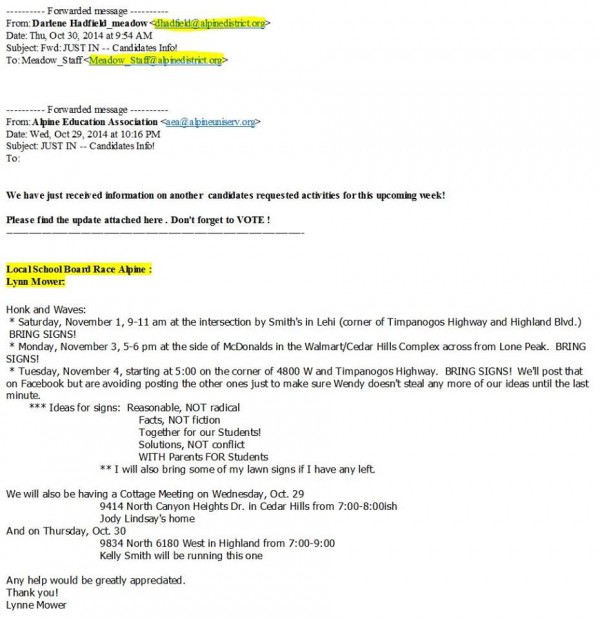 I am sorry to say that today I saw copies of 3 additional emails that violate ASD policy and state election law. Here is the email I just send to Superintendent Henshaw with copies to the the Lt. Governor and the County Clerk along with pictures of the emails.

Last week I sent you the note below regarding information that was brought up at the recent school ASD board meeting. Today I am sorry that I became aware of 3 additional emails (see attached files) that were sent out from Alpine District Email addresses to recipients using an Alpine District Email distribution list. They promote a specific set of candidates, an inferred set of candidates, helped to organize a campaign event for a specific candidate and indicated that specific candidate names were posted on a white board in the faculty lounge of a school. I am pretty sure that these are all violations of ASD policy and I am guessing that they are also violations of state election law. You’ll notice that most the content of one of the emails is from the AEA. The problem with this one is that a school employee used an ASD email account to forward this information using an ASD Distribution List.

As I said in the email below I have a separate concern if you first hear of such violations from people outside the district. This would indicate that teachers and staff are either 1) ignorant of district policy and state election laws, or 2) are afraid of directly reporting violations, and/or 3) are willfully violating district policy and election law to ensure that the “right” outcome occurs.

It would appear that you have a serious problem with campaign policy and law in the district. I would hope that these get fixed. Please be aware that regardless of the outcome of the election I will use my best efforts to ensure that legislative policies are enacted that will serve as a more effective deterrent than the current code allows.

I would hope that in the meantime that the district would be more rigorous in informing teachers and staff about ASD policy and state election law and then find a means to deter future violations. I would also hope that the county and state would look into what appears a systemic problem with government resources being used to influence election results. Also, I believe there is a good chance that a hostile work environment exists for those teachers who do not agree with the AEA.

I attended the board meeting this evening and just want to share with you my point of view on the emails. The board is clearly divided on some issues and that is not bad. Healthy discussion generally creates better solutions. Reading the recent email from board vice president JoDee Sundberg to district personnel (I’m assuming it was to all principals) and Keith Conley’s (principal of Geneva Elementary School) email indicating to staff and teachers who they should support as well as recounting a teacher/staff meeting where he distributed campaign information, shows the strong personal animus that is being propagated throughout district personnel. This is not healthy discussion.

The emails support a viewpoint that the district has its own agenda and uses tax payer resources to ensure that candidates who support that agenda are elected. I would expect you to be very concerned if the first you heard of the email was through the Internet/Facebook. This would mean that no recipient of either Mrs. Sundberg’s or Mr. Conley’s email and no one who attended the meeting Mr. Conley references had the courage to share this information with you as a violation of district policy and/or state election law. How sad it would be if someone who might have considered reporting this was dissuaded from doing so out of fear of potential repercussions (after all the board vice-president seemingly encouraged the behavior).

The principal not only encouraged his staff and teachers to violate policy, he also broke trust with the community he serves by using his time at work and district resources, paid for by all tax payers, to actively work against some of them — in other words he used the resources of government to try and impose his personal (and Mrs. Sundberg’s) will on those he serves. I understand that the Lt. Governor has spoken with you and that an apology to those Mr. Conley sent the email to will be forth coming. The seems insufficient. If an apology will be written, it should be a public apology to all those whose trust he violated and whose funds he misused. I can’t help but wonder if this is the first time this happened. Is an apology enough to prevent it from happening again? I’m not sure. If I was willing to violate district policy and/or state law to accomplish a mission and I knew that if caught I would simply have to apologize, I doubt I would be deterred from acting.

That a board member would abuse her authority and encourage district personnel to violate district policy and the law is also disturbing. Were I on the board this certainly have diminished my trust in her and might affect my willingness to engage with her. Do you really want a board where open hostility reigns and trust is absent. I don’t envy your challenge.

I would encourage you to not just let this blow over, but to take active and public steps to ensure that there are strong incentives in place to discourage this kind of behavior going forward. That will go a long way to restoring trust.

A quick note on another matter. A city attorney attends all council meetings and most work sessions in Highland (I imagine that most other cities do the same). This allows all council members to directly ask questions and receive an immediate response. I find this practice to be of great value. I would recommend the same for the school board. That would eliminate any perception that the administration is blocking certain board members from obtain legal opinions on matters pertinent to the board.