Just a quick reminder that as we enter the election window, ASD employees are encouraged to study the issues and involve themselves in the political process.  Since questions occasionally arise regarding appropriate political involvement by school employees, the following reminders may be helpful:

Great work on a successful first term of the school year!  Have a good week,

The problem is, Mr. Browning is a hypocrite. 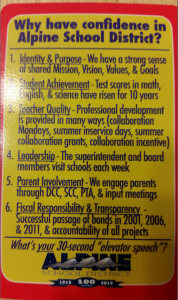 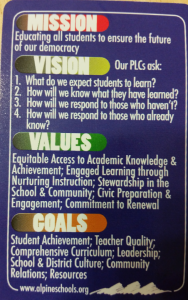 I spoke with a teacher last night who informs me that at the faculty meeting at the beginning of October, Mr. Browning told the faculty that he is very involved in politics and that he had a meet the candidate event at his home and one of the candidates is critical in some regard to some issues in Alpine School District (it was unclear if Chris Jolley had actually been invited to this event). He then pulled  out a card (pictured at the left) and proceeded to say how great the Alpine School District is and what it gives to the communities.

This teacher explained to me, “Mr. Browning said, here we have PLCs, collaboration, and such, and encouraged us to have the cards in our wallet and when people were critical of the Alpine School District show them that we support the district and what it does for us and for our communities. While Mr. Browning’s speech wasn’t “technically” a political speech his words were almost, exactly the same as what was said by Mr. Conley in his now infamous very political email sent to his faculty. It is very evident that both of these principals got their information from the same sources, mainly the administrators in the district.  I came away from that faculty meeting knowing full well where Alpine District’s wants were concerning this upcoming election. It’s very evident that the district is on a public relations push to show just how much good the district is doing and that major changes are not needed. This is a way, non-political of course, to show where they stand concerning the upcoming elections. The cards, the words to the principals, which are trickling down to the teachers, all show that the district administration is very concerned about the possible change of direction if John Burton and JoDee Sundberg are voted out.”

Here’s some more information that came out after yesterday’s post. It appears current Board President and former long time Alpine School District administrator John Burton may have his own set of problems to deal with. Rick Armknecht posted this in the comments section.

Sadly, the emails shown here may include violations of law on the part of a great many public servants.

ALL of these recipients were put on notice of the principal’s illegal campaigning as of last Friday (the 24th) morning (assuming that they read their emails every 2 hours or so during work hours). What did they do about it? Looks like one became a “whistle blower.”   But what about the others? IF they read the email sent to them and IF they knew (or reasonably SHOULD HAVE KNOWN) about the illegality of the email AND if their position would imply that they DO something to stop the illegal conduct but they failed to take any action (yes, I know — a string of “ifs” there), then there is a violation of Utah law:

For the purposes of this chapter:

(5)          (a)          “Public servant” means any officer or employee of the state or any political subdivision of the state, including judges, legislators, consultants, and persons otherwise performing a governmental function.

So: What did John Burton know and when did he know it?

It seems to me that ASD has a pattern of doing what they want without any fear of repercussion. The ends (them maintaining power at all costs) justifies the means (violations of ethics and the law, particularly in the case of Ms. Sundberg and Principal Conley). Will there be enforcement of the law? It’s doubtful unless people rise up and say the law matters.

If Mr. Burton is OK with knowing this is going on under his watch as a publicly elected school board member and having been a long time administrator at ASD, he should resign his position and withdraw from the ballot. Nobody knows election ethics more than school administrators and the fact that this is knowingly allowed and even encouraged by inaction is a big problem.