Read Part 1 of this 3 part article

In the Schools Today

2004 was my pivotal year. My oldest was in 3rd grade and I discovered that Alpine School District was no longer teaching the times tables or long division to children and hadn’t for at least 3 straight years. What in the world was happening?

Alpine and several other districts had partnered with BYU’s McKay School of Education under the leadership of John Goodlad in 1983, forming a Public School Partnership, and they were pushing an educational philosophy called constructivism. The basis of this theory is that knowledge is socially constructed, or in other words, a democratic approach to knowledge and morals. This moral relativism is at the heart of constructivism. Another notion is that when knowledge is constructed, it is retained better. That can be true, but it also means a tremendous loss of foundational knowledge that could have been obtained by someone with an efficient algorithm. Constructivism is heavy on group work, deemphasizing the individual and emphasizing the collective efforts of students who come up with “strategies” to approach problems. It is also called inquiry-based learning for the approach that students should inquire to learn. The process is also deemed more important than the result so students might get no right answers on an exam but still score high on the test for showing a lot of work.

Constructivists have a philosophical difference in opposition to Direct Instruction methods of teaching which comes out of the stimulus/response system of behavioral psychologists like B.F. Skinner. At the extreme, the Direct Instruction method of teaching can tend to not produce long term retention because it’s geared more toward telling a student exactly what must be learned, and then regurgitating it.

Several years ago when I was pondering the lunacy promoted by Goodlad and embraced by seemingly intelligent adults in Alpine School District’s leadership, I came across Project Follow-Through. This was the largest education study ever performed. A billion dollars spent tracking about 170,000 students over decades of time to determine which educational model was most effective in teaching children. The results were stunningly clear. Constructivist math oriented programs like Investigations, Connected, and Interactive math used by Alpine School District were utter failures. Anyone with a shred of common sense knew that intuitively, but it was nice to see it confirmed in a government funded study. Direct Instruction crushed the competition. Naturally, sharing this with the ASD school board and administration had no effect to course correct their direction and do what was best for the children in the district because they were steeped in John Goodlad’s philosophy and regularly taught with him at his annual NNER conferences. Our superintendent even served on Goodlad’s NNER executive committee.

What I didn’t realize when I jumped into the math fight was that although these results were a stunning indictment of constructivism, they were also missing something important about Direct Instruction.

The Deliberate Dumbing Down of America

Charlotte Iserbyt was a senior policy adviser to President Reagan on education matters. She went to work at the Department of Education (DOE) and after discovering what they were up to, stayed after hours to copy and document what these people were doing to American children. Her work was later published as The Deliberate Dumbing Down of America. I strongly urge everyone reading this to go to her website and download and save a free copy of this PDF book to your hard drive (after you finish reading this article :)). 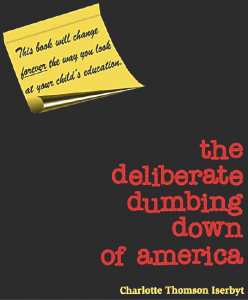 While reading The Deliberate Dumbing Down of America (DDDoA), I came to realize that “Direct Instruction” is not the same thing as “direct instruction.” One is a program and the other is a method.

Siegfried Englemann created the DISTAR (Direct Instruction System for Teaching Arithmetic and Reading) program which followed a heavily scripted sequence where the teacher would read something to the children and get constant feedback to ensure they were on track and learning what they were supposed to. As seen in Project Follow Through, this method was vastly superior to constructivist philosophies, but it had its own drawbacks as well. Little case “direct instruction” was simply traditional educating and it was not part of the Project Follow Through study. Here’s a quote from DDDoA.

[Ed. Note: Although the evaluation of [Project] Follow Through cited some academic and self-esteem
gains at some Direct Instruction model sites, it would have been virtually impossible for these
gains not to have been made considering the models with which they were compared—the
non-academic focus of the “touchy-feely” open classroom. Had the Direct Instruction model
been in competition with a traditional phonics program which was not based on animal behavioral
psychology (“scientific, research-based”), it is most unlikely it would have been able to
point to any gains at all. Unsuspecting parents in the 1990s seeking more structured academic
education for their children than can be found in schools experimenting with constructivistic
developmental programs (whole language, etc.) are turning to DI, not realizing they are embracing
a method based on mastery learning and animal psychology.]

Charlotte’s lengthy book exposed all these educational fads and rackets. One paper she wrote concerned Reagan and the DOE contained this clip about John Goodlad. (emphasis mine)

One night, while looking for a typewriter ribbon, I noticed in the

corner of a storage room a box entitled “The Goodlad Study“. I just

years, especially when I served as a local school board member

prior to going into the Department of Education. Much of the values

could be laid at his feet. This particular box held a gold mine of

information regarding the efforts of the tax-exempt foundations

and the federal government to implement the United Nations

agenda, to restructure American schools for global government. I

couldn’t believe what had landed in my lap! Four books, all published

by McGraw Hill, were commissioned for this Study. They were:

and their Schools” which laid out the socialist/communitarian

agenda to be implemented in America through the schools, pointing

students’ perceptions and values; and the worst one of all, James

Becker’s “Schooling for a Global Age” which contained the

Foreward by John Goodlad from which parents love to quote:

“Parents and the general public must be reached also.

programs may find themselves in conflict with values

assumed in the home. And then the educational institution

frequently comes under scrutiny and must pull back.“

As an aside: when I returned home I called McGraw Hill to order the

put me No. 1 on their list which they did. Later, when I checked

back with them, they said: “Don’t worry, Mrs. Iserbyt, we’ll get them

to you as soon as they are received; you are No. 1, even ahead of

each of the 50 Chief State School Officers.” That sure told me something

about how important these books were and exactly who would be

carrying out the radical agendas promoted in each one of them.