“There is much more involved here, than just a list of standards… if all the facts were known, it would be more than obvious that the legislature would make the move to abandon Common Core.”

Margaret Wilkin has given permission to post her letter to the Utah legislature.  She retired last year from Canyons District. 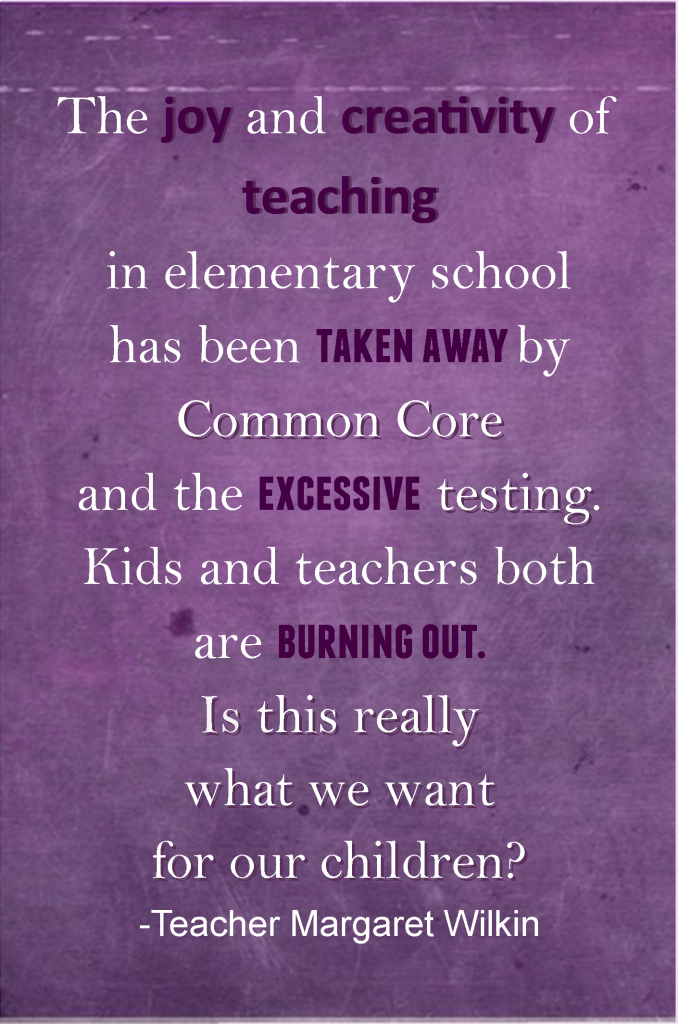 … On March 21, 2013, I was asked to return to the elementary school from which I retired last June, to give a presentation at their Literacy Night.  Some of the parents and students I taught in the past came down to the room where I was to say hello. In the course of the conversation, a mother of one of the smartest and most conscientious students I have ever had, said that her daughter was struggling in math.

I was surprised, but told her mother that teachers are required to teach to a rigid schedule and must move on to the next unit of study, even if the students don’t understand it.

Sticking to the schedule is more important than spending the time making sure everyone understands.

I knew as a teacher what I didn’t like about Common Core, as well as what had taken place leading up to it, but I didn’t have any concrete facts; therefore, I couldn’t give the parents any verifiable information other than my own story. I have spent the last five weeks researching and learning about Common Core. There are so many facets to Common Core, and I still don’t know everything, but I know much more than I did five weeks ago and enough to know that even without my own experience, I could not support it.

This morning I saw the e-mail from Diana Suddreth, the STEM Coordinator at the USOE, asking the Curriculum Director in each school district in Utah to solicit “success stories” from teachers using Common Core standards. She has further stated in her e-mail that she has seen marvelous and exciting things happening in classrooms since the implementation of Common Core. She stated that these “success stories” are needed to counteract the “vicious attacks” by those opposed to Common Core.

Aaron, are you aware that you and Senator Weiler are named by Diana Suddreth as the only two legislators to contact with the Common Core “success stories”? Am I to understand that you and Senator Weiler are therefore supportive of the Common Core Standards for the State of Utah?  If you are, I find this confusing since you have spoken so often of the important principle of local and State control of education. Common Core takes away local and State control, and puts the control into the hands of the Federal Government.

My response to Diana Suddreth is:

1. Utah has always had standards which teachers were required to follow.  2. It is not a matter of “voila” Common Core is here and at long last, wonderful things are happening in classrooms!  Exciting and wonderful things happen in classrooms because of the teacher’s own hard work and creativity along with the freedom to decide how to best teach the standards that make for success in the classroom, NOT because a list of Federally mandated Common Core standards.  3. Tax payers asking legitimate questions of elected officials and those employed at the USOE, and having the expectation of them to have studied the issues more carefully than the people asking the questions “is not too much to ask”.  Asking questions is not a “vicious attack”.  This is the future of our children’s education at stake as well as millions of taxpayer dollars.

Here is my unsolicited “success” story about Common Core:

Please note that I am speaking only to what is happening in the Canyons School District and at the elementary level. And I am speaking out because I am retired. Those teachers in the school system are afraid of losing their jobs if they speak out against Common Core and against the policies of the District.

The teachers have been given a rigid schedule which MUST be followed. In the morning, there is to be three hours of reading and language arts followed in the afternoon by two hours of math. P.E. and computer time has been shortened from 45 minutes to 30 minutes once a week.  That leaves 15 minutes of time each day for one of the following: music, art, science and social studies.

The teachers are monitored regularly by the principal, reading specialist and district personnel to make sure they are following the schedule.

Last year, when I was still teaching, the math portion of Common Core was put into place with the District’s purchase of the Pearson-Scott Foresman math series. As of last year, the “curriculum map” or math schedule did not match the organization of the book.  So every night, I had to hunt, using many sources, for what I was to teach the next day in order to follow the curriculum map. This is still the case as of this year.

We were to teach certain concepts during specified blocks of time and sometimes these concepts had no relationship to each other. After the specified blocks of time are completed, the students are tested in the computer lab, mainly so that the district can make sure the teachers are following the schedule. Even if the students do not understand the concepts being taught, the teacher must move on to the next block in order to follow the mandated schedule.

This removes the teacher’s ability to teach according to the needs of her/his particular class. One of the basic tenants of teaching is: monitor and then adjust to the needs of your students. The schedule as required by the District makes this very difficult to do.

We skim over the surface of many concepts. If you have seen any of the ridiculous examples of teaching two-digit multiplication and addition that people have posted on Facebook, yes, I have taught this because it is on the test.

I was in the classroom through the time leading up to the implementation of Common Core, as math was being “dumbed down” and during the time when we were told not to teach multiplication facts, two and three digit multiplication and long division to fourth graders. How could any respectable teacher not teach this?  This is not the case at the present time (times tables and long division and two and three digit multiplication are again being taught); however, the time allotted to teach these concepts is not long enough for many kids to grasp the idea.

My ability to be an effective math teacher was GREATLY diminished by having to follow the Common Core standards.

For this current school year, Canyons District purchased the Pearson reading series, “Reading Street” to match up with Common Core. (A perfectly good reading series which was not worn out was discarded. Why couldn’t this discarded series just have been supplemented with additional materials instead of wasting taxpayer money on new books?)

Reading and language arts, as in math, requires strict adherence to the schedule with regular monitoring by the principal, reading specialist and district personnel.

The students have 8 math and 6 reading computerized tests as well as three oral reading tests administered by the district. The upper grades have an additional test called MAZE. This does not count the end of the year testing in the computer lab. After the results are back the teacher is called into the principal’s office, along with the reading specialist, to account for the scores.

These tests are in addition to the regular weekly spelling, reading and math tests from the book publisher and teacher for the report card grades.

Speaking of report cards, we were told last year that the District was going to have workshops for parents so that they could understand the new report card which was going to be aligned with the Common Core standards. Wouldn’t the necessity of needing a workshop to teach parents how to interpret an elementary school report card, tell the District that this was a bad idea?

The lower performing students have just plain given up with this constant testing and will not even try any more. Teachers report that some of their students’ scores are actually getting worse. And again, teachers are called into the principal’s office to be grilled about what the teacher is going to do to bring up the scores, so that EVERY student is meeting the required benchmarks, when they are already doing everything they can to teach the material. Apparently, a child’s developmental readiness or ability is not taken in to consideration.

Is the child’s or teacher’s value only a test score?

The pressure on the teachers from the administration is INTENSE and many teachers say all they can do is teach to the test.

A second grade teacher recounted that she didn’t even dare have her class color a shamrock on St. Patrick’s Day because of the constant micromanaging by the administration and coloring a shamrock is not on the schedule.

Many teachers are saying they just can’t do this anymore. The joy and creativity of teaching in elementary school has been taken away by Common Core and the excessive testing. Kids and teachers both are burning out. Is this really what we want for our children?

Because of Common Core our freedom is being lost even down to the lowest level: the classroom.

There are MANY reasons to oppose Common Core. Here are just a few:

1. Data and assessment driven.  2. Adopted by the State School Board by accepting stimulus money and agreeing to the Common core standards before they had even been written.  3. Family rights to privacy, as spelled out in FERPA (Family Educational Rights and Privacy Act), have been essentially amended making computer testing a major tool in gathering information about students that should remain private. This is known as Data Mining.  4. Adopting these standards takes decision making out of State and local school boards and districts, but, even more importantly, out of the hands of teachers and parents. 5. The State Legislature was bypassed by not being included in the decision of whether or not to adopt Common Core.

There are so many layers to Common Core. There is much more involved here, than just a list of standards. My experience is just one part, but an important part. Frankly, it seems to me that if all the facts were known, it would be more than obvious that the legislature would make the move to abandon Common Core.

I am not against Common Core because I have been around for SO long that I don’t want change, but because I can see the harm it is doing to my profession and to students. The freedom of the parents, teachers, school districts and states to choose what is best for them has been taken away and will be controlled by the Federal government.

May I recommend to you a video presentation explaining Common Core that has been posted on You Tube. It is one of the best presentations I have seen. If you type in Google “You Tube Subversive Threat to Education”, you should be able to find it. It is a current talk given to a group in Tennessee.

Thank you again for all the hours of service you give to our community and State.