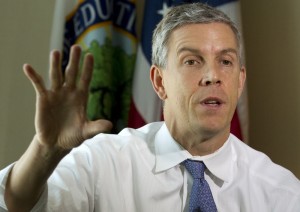 In yesterday’s speech to the American Society of News Editors, Duncan said:

“…This event has been an opportunity for federal leaders to talk about touchy subjects. For example, you asked President Kennedy to talk about the Bay of Pigs. So, thanks for having me here to talk about the Common Core State Standards. Academic standards used to be just a subject for after-school department meetings and late-night state board sessions. But now, they’re a topic for dueling newspaper editorials. Why? That’s because a new set of standards… are under attack as a federal takeover of the schools… And your role in sorting out truth from nonsense is really important.”

Duncan admits: “… the federal government has nothing to do with curriculum. In fact, we’re prohibited by law from creating or mandating curricula. So do the reporting. Ask the Common Core critics: Please identify a single lesson plan that the federal government created…Challenge them to produce evidence—because they won’t find it. It simply doesn’t exist”.

Thank you, Secretary Duncan, for pointing this out.

Federally created lesson plans don’t exist because Duncan’s department has worked so hard to get around the rules (i.e., Constitution) and to make others do the wrongs that the Department then promotes and funds. The Department’s associates (i.e. Linda Darling-Hammond, Bill Gates, David Coleman) work with Achieve, Inc., with SBAC, with PARCC, with CCSSO, with NGA and others, to collectively produce the federally-approved education “reform” agenda known as the Common Core Initiative. We know this.

But, thanks to Duncan for bringing up the term “lack of evidence.” We’ll get to that.

Duncan says: “The Department of Education is prohibited from creating or mandating curricula.” YES!

Yet the Department has coerced and urged and cajoled and bribed American educators into joining the Common Core State Standards Initiative, has funded tests upon which these standards are bases, and have mandated that the testing consortia must share student-level data with the federal government concerning Common Core tests. Just see the Cooperative Agreement for oodles of power-grabbing evidence that uses the tests as vehicles.

Duncan says there is no evidence of a federal takeover using Common Core. Well, almost; there is no trace of an Department of Education fingerprint on the writing of the national standards, tests and curriculum. This it correct.

But there are massive, unmistakable Department of Education fingerprints all over the promotion, marketing, funding and imposition of the standards on states. These fingerprints are everywhere.

It was David Coleman and his four friends who wrote the standards (with token feedback, largely ignored, from others) It was PARCC, SBAC, and AIR that created the common tests. It was Bill Gates (who partnered with Pearson) to write the lion’s share of the American educational curriculum. And it is the Department of Education that put a 15% cap on top of those copyrighted standards that they say are state-led.

Guess what? There is no evidence that Common Core will do anything it has claimed it can do does not exist– there’s no empirical data, no pilot test, no study to verify claims that the standards will improve diddly.

We might each ask the reporters to ask for that evidence.

NOT RADICAL/ NOT CURRICULUM

Duncan says that Common Core agenda is “neither radical nor a curriculum.”

I beg to differ.

It is radical to create nationalized, (socialist-styled) testing and standards for schools in a land of liberty.

It is radical to shred the Family Educational Rights Privacy Act (FERPA) as the Department of Education has done, to demote “parental consent” from a privacy-protecting mandate to a “best practice” and to redefine protective terms to make them nonprotective, including “educational agency,” “directory information,” and “authorized representative.”

It is radical to carefully work around the U.S. Constitution and G.E.P.A. law’s prohibitions against federal control of education. For just one example: in the “Cooperative Agreement” between the Department of Ed and the Smarter Balanced Assessment Consortium (SBAC) the federal government demands that states give conferences and phone updates, synchronicity of educational tests, triangulation of collected student-level data under the federal eye, and much more.

And Common Core is driving and creating a national curriculum, by encouraging governmental and corporate collusion to narrow and monopolize the educational purchases of the nation.

As the main funder of Common Core, Bill Gates, said in his speech at a 2009 Conference of State Legislatures, “Identifying common standards is just the starting point. We’ll only know if this effort has succeeded when the curriculum and tests are aligned to these standards… When the tests are aligned to the Common standards, the curriculum will line up as well…. for the first time, there will be a large, uniform base of customers.” Watch clip here.

Duncan also denies the existence of any federal push to collect personal student data. He says that critics, “make even more outlandish claims. They say that the Common Core calls for federal collection of student data. For the record, we are not allowed to, and we won’t.”

No federal collection of student data? What a huge lie. Readers, please fact-check Secretary Duncan yourselves.

Aggregated student data has long been collected federally at the Edfacts Data Exchange. Edfacts states, “EDFacts is a U. S. Department of Education initiative to put performance data at the center of policy, management and budget decisions for all K-12 educational programs. EDFacts centralizes performance data supplied by K-12 state education agencies.” Although the information collected here is aggregated (grouped, not individualized) data, this will change because of the federal requests for more disaggregated (ungrouped, individualized) data.

Here are some federal sites you may click on to verify that the federal government is asking for more and more data points about each individual in our school systems. Click on:

And Duncan is surely aware that the Council of Chief State School Officers (CCSSO) which helped copyright and produce the standards, has a stated commitment to disaggregation of student data.

If Arne Duncan were truly concerned about the quality of American schools, if he and his group cared about the education of children and not the controlling and surveillance of populations, then would they not have pushed for tested, piloted standards that would have used, for example, the sky-high standards of Massachusetts as a template, rather than circumventing all voters, circumventing academic tradition, and using this literature-diminishing, algorithm-slowing, cursive-slashing, informational text-pushing, unpiloted experiment called Common Core?

So am I suggesting that this is a diabolical scheme? YES.

Duncan himself used the term in his speech. To make fun of those of us who see it as exactly that.

He quoted columnist Michael Gerson —President Bush’s former speechwriter— who wrote that if the Common Core “is a conspiracy against limited government, it has somehow managed to recruit governors Mitch Daniels and Jeb Bush, current governors Bobby Jindal and Chris Christie, and the U.S. Chamber of Commerce… A plot this vast is either diabolical or imaginary.”

Diabolical is the right word.

While Duncan and his education reformers may truly believe that socialism/communism is the way to go, I do not. And if most of America does, then let’s at least vote on it.

If anyone doubts that total governmental control of schools and children, to the detriment of families, is Duncan’s direction, view Duncan’s interview on Charlie Rose, where he outlines his goals for the complete takeover of family life by schools. Schools are to be health clinics, parental education centers, are to be open six or seven days a week and twelve hours or more per day, all year round, as day and night centers of civilization.

Not by a long shot.

2 thoughts on “Spin It Like Duncan: US Secretary of Education to American Editors”