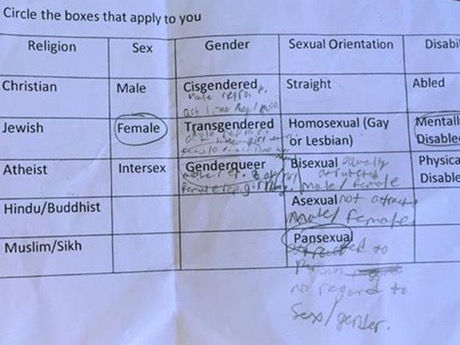 The following article by Jane Robbins and Karen Effrem is reprinted with permission from http://thefederalist.com/2016/10/19/schools-ditch-academics-for-emotional-manipulation/.

This summer the Collaborative for Academic, Social and Emotional Learning (CASEL) announced it had chosen eight states to collaborate on creating K-12 “social emotional learning” (SEL) standards. All students, from kindergartners through high-school seniors, would be measured on five “non-cognitive” factors: self-awareness, self-management, social awareness, relationship skills, and responsible decision-making.

But less than two months later, two of the CASEL states (Tennessee and Georgia) have withdrawn from the initiative. Parents have begun to realize the dangers of SEL and to challenge their schools’ lemming-like march toward psychological manipulation of children.

We’ve written about the push by the U.S. Department of Education (USED) and the rest of the progressive education establishment to transform education from academic content instruction to molding and assessing children’s attitudes, mindsets, and behaviors. The infamous “outcome-based education” (OBE) in the 1990s began the trend, and Head Start and the Common Core national standards advance the same foundational principles.

The new federal Every Student Succeeds Act (ESSA) ramps up the trend in several ways. ESSA requires rating schools based partly on “nonacademic” factors, which may include measures of SEL. It also pours money into SEL programs, “which may include engaging or supporting families at school or at home” (i.e., home visits by bureaucrats).

Other provisions include training school personnel on “when and how to refer . . . children with, or at risk of, mental illness,” and implementing programs for children who are deemed “at-risk” of academic or social problems, without ever defining “at-risk.” Similar ESSA language urges school officials to cast a wide net for special education in school-wide “intervention” and “support” programs, allowing schools to sidestep parental consent requirements for formal evaluations.

Beyond ESSA, at least three other federal initiatives aim to monitor children’s attitudes and beliefs. One is the planned revision of the National Assessment of Educational Progress (NAEP), the test referred to as “the nation’s report card,” to assess mindsets and school climate. This revision has been challenged not only on constitutional and privacy grounds, but as a violation of federal law. Of course, law is merely an inconvenience to the Obama administration.

The second effort would fund federally controlled and funded “social emotional research” in the proposed Strengthening Education Through Research Act (SETRA)—a bill supported by individuals and corporations that will profit handsomely from all this sensitive data to help them mold worker bees for the global economy.

A third federal initiative is USED’s bribery of states to promote SEL standards and data-gathering on preschool children via the Race to the Top Early Learning Challenge grants. These grants, along with the preschool grants in ESSA and Head Start, promote “Baby Common Core”-style SEL standards and data-collection and preserving this in states’ student-data systems. So now every child’s permanent dossier can include how well he played with others when he was four.

The problems with SEL are both philosophical and operational. Parents rightly object that the school (which means the government) has no business analyzing and trying to change a child’s psychological makeup. It’s one thing to enforce discipline in a classroom and encourage individual students to do their best; good teachers have done that from time immemorial. It’s quite another to assess students on their compliance with highly subjective behavioral standards that may measure personality and individual or family beliefs more than objective shortcomings in performance. The school exists to assist parents in educating their children, not to replace them in that role.

Writing in trade publication Education Week, a SEL consultant touts a new assessment “to generate data about such character strengths as responsibility, resilience, teamwork, curiosity, and leadership.” This violation of both privacy and freedom of conscience is also an alarming effort to standardize children, who normally develop at very different rates and in very different ways, to fit government-determined norms. The government has no right to collect data on any child’s “character strengths,” which are the most personal aspects of a child’s psyche. Period.

The operational problems are also daunting. Who will be assessing a child using these subjective criteria? Psychiatrists, psychologists, and counselors undergo years of training to delve into this murky area. But even these experts admit there are no firm criteria for mental-health diagnoses, especially in children. The World Health Organization, hardly a bastion of conservative medical or political thought, warned: “Childhood and adolescence being developmental phases, it is difficult to draw clear boundaries between phenomena that are part of normal development and others that are abnormal.”

Through SEL, however, the government wants to have teachers making such evaluations. Psychologist Dr. Gary Thompson has emphasized that placing this type of responsibility in the hands of untrained even if well-meaning people can be dangerous for the children who may be improperly labeled. These dangers can include even forced treatment with medications that have harmful side effects, or threatened or actual removal of children from their homes if parents refuse the treatment.

Student self-reporting such as surveys, another common means of compiling SEL data, is similarly unreliable. Prominent SEL proponents Dr. Angela Duckworth and David Yeager have pointed out that students may interpret survey questions differently from how the creators intended, and that the questions are unlikely to detect incremental changes. As parents of teenaged boys can attest, many children will treat such surveys as a joke and gladly take the opportunity to respond in the most outrageous manner possible.

Because “perfectly unbiased, unfakeable, and error-free [SEL] measures are an ideal, not a reality,” Duckworth and Yeager argue, such measures should not be used to evaluate schools or teachers. Duckworth was so concerned about using these highly subjective criteria in federally mandated accountability schemes that she withdrew from a California project to do just that. But this is exactly what USED is pushing through ESSA, and CASEL through its K-12 standards.

Dangerous Data in the Permanent Record

Despite the objections even from SEL proponents, the movement advances to assess, record, and analyze personal characteristics of children. What happens to all that data? Incentivized by USED, states are building massive statewide longitudinal data systems to track every aspect of every student from cradle to, or through, their career. Thus, unreliable data collected from making guesses about students’ emotional states will presumably be entered into the database, to live in eternity.

Who might want to get their hands on that data? Would a college or employer be interested in whether a particular applicant shows curiosity or “grit”? Would a prosecutor like to know if a young suspect lacked “relationship skills” in high school? Or perhaps that prosecutor would want to know if that child had violated the school’s zero-tolerance policy in kindergarten, even if only with a “bubble gun.” Because USED has gutted federal student-privacy law to allow sharing personally identifiable information on students with almost anyone the government wants, it’s very possible such entities could access that data—without parental consent.

If such psychological data resided in a psychologist’s office, it would be protected by HIPAA (the Health Insurance Portability and Accountability Act). Would it be similarly protected if located in a school’s database? No. It would probably be considered merely an “education record” subject to (not protected by) federal student-privacy law.

So as parents are beginning to recognize, this entire SEL scheme is objectionable on many levels. Particularly troubling are indications that CASEL and other SEL proponents advance political and cultural viewpoints that conflict with those of many families. Parents will be assured the goal is merely to instill more positive mindsets to increase academic achievement, but the evidence suggests another motivation is in play.

It’s revealing to examine the connections CASEL has to far-left individuals and organizations that push particular agendas. One CASEL board member is Linda Darling-Hammond, the radical education professor who was Bill Ayers’s choice to be President Obama’s secretary of Education.

Darling-Hammond also leads the liberal Aspen Institute’s new National Commission on Social, Emotional, and Academic Development. In a video made to promote this commission, Darling-Hammond makes it clear that SEL will be used to instill attitudes that will ultimately help solve perceived global problems: “If you look at the state of the world, with conflict and inadequate resources for many people . . . it is our social and emotional intelligence that is going to pull us through to the world that we want.” Parents might wonder if the world they want and the world Darling-Hammond wants are the same thing.

CASEL’s partnerships and funding also show a distinct political tilt. CASEL is funded partly by the federal government’s Institute for Education Sciences (the same agency that wants to assess mindsets in NAEP and to have social emotional research become a federal mandate) and partly by a range of liberal foundations. Among these are the Robert Wood Johnson Foundation, which promotes socialized health care and bemoans the effect of climate change on “health and equity”; and the 1440 Foundation, which pushes Buddhist “mindfulness” techniques and raises alarms about climate change.

Another major funder of CASEL is the NoVo Foundation, which seeks to use SEL to “play a significant role in shifting our culture of systemic inequality and violence toward a new ethos that values and prioritizes collaboration and partnership.” NoVo’s founders make funding decisions to change “systems [that are] based on domination, competition, and exploitation.” Presumably they think CASEL and SEL will help them overturn these exploitative systems.

One area of particular concern to NoVo is LGBT issues. In December 2015, NoVo partnered with the Arcus Foundation to kick off a five-year philanthropic initiative focused on “improving the lives of transgender people worldwide.”

So CASEL partners with organizations that openly seek to change the world (or “systems”) in areas such as health care, climate regulation, and sexual politics. How would SEL help accomplish that? Well, if schools are measuring students’ “social awareness,” might that encompass opinions of supposedly critical global problems such as climate change? And might a student’s “relationship skills” be deemed deficient if, in keeping with the influence of his family and faith, he rejects the LGBT agenda such as same-sex marriage and normalization of gender dysphoria?

Lest we be accused of alarmism, consider the many sample lessons offered by a CASEL partner called Morningside Center for Teaching Social Responsibility. One teaches students the perils of climate change and fracking in North Dakota; another encourages students to “take action toward transgender equity.” This fits well with the type of surveys and assessments being collected on children in a Florida middle-school Spanish class:

Regardless of one’s opinions on a given issue, it is parents’ right and authority to discuss these issues with their children, not the government’s to set standardized norms about thoughts, emotions, attitudes, and beliefs. When government begins manipulating the mindsets of still developing and impressionable children, the dangers are legion. Imagine what Vladimir Lenin could have done with these types of standards, curricula, and linkable databases accessible at the touch of a button.

Samuel Adams said in 1776, “Driven from every other corner of the earth, freedom of thought and the right of private judgment in matters of conscience direct [new Americans] . . . to this happy country as their last asylum.” Unless parents and other citizens stand against this kind of tyranny of the mind, our country will warp into one Adams wouldn’t recognize, and our children will be sacrificed to achieve the transformation.

Jane Robbins is an attorney and a senior fellow with the American Principles Project in Washington DC. Dr. Karen Effrem is a pediatrician and president of Education Liberty Watch.

One thought on “Schools Ditch Academics For Emotional Manipulation”