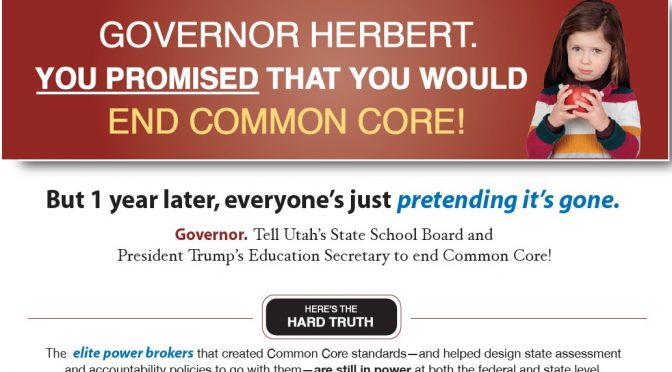 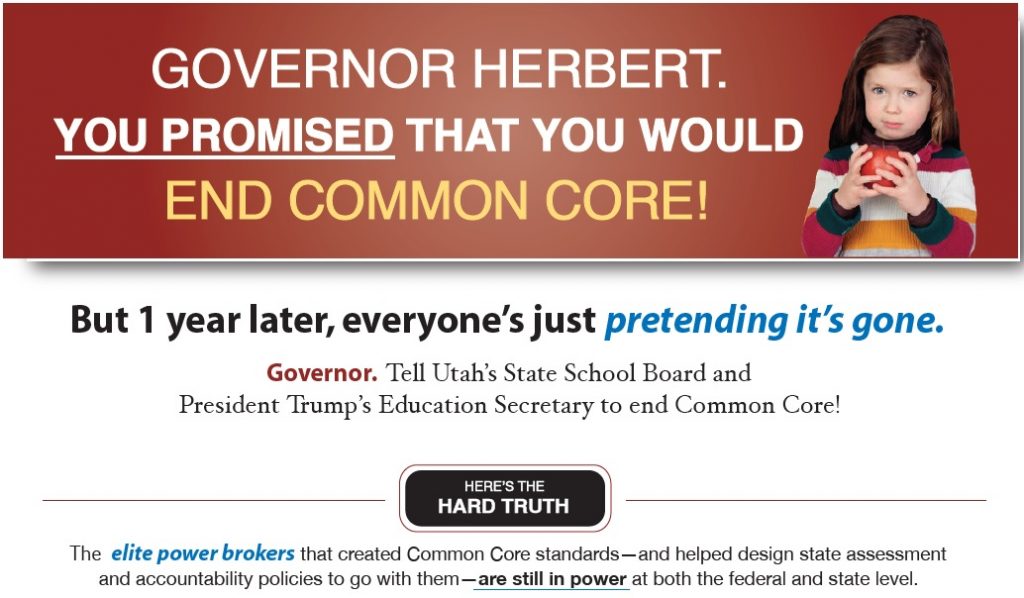 
Governor Herbert told Republican delegates during his campaign in 2016, that he would put an end to Common Core and restore local education control. But, nothing came of his promise:

May 4, 2016: Governor Herbert issued a letter and visited the s State School Board to ask them to withdraw from Common Core. The State Board voted to do so, pending funding from the legislature. Nobody followed through to get the legislature to fund it. The Governor should lead out and use his position to keep this promise to Utah.

February 16, 2017: Education Week reported that Trump’s US Education Secretary Betsy DeVos told Michigan radio station host Frank Beckmann that the Every Student Succeeds Act (ESSA) effectively does away “with the notion of the Common Core.”

President Obama’s administration designed the Every Student Succeeds Act (ESSA) to look like the bill was returning power to the states, when the administration had already effectively given power over states and districts to Common Core’s creators through Race to the Top:

The White House further reported, “Today, as President Obama signs that bill into law, the White House is releasing an analysis of progress made in elementary and secondary education since the President took office and how ESSA will cement that progress.”

May 20, 2017: President Trump’s US Education Secretary Betsy DeVos gave a speech to Common Core’s co-creators, the CCSSO* and told them that the CCSSO would be in charge of state’s and district’s reforms now that Obama’s Every Student Succeeds Act (ESSA) is in place.

*Note: The Council of Chief State School Officers (CCSSO) is a CEO led club for all State Superintendents in the country. They co-created Common Core and have effectively taken all the control that State Superintendents have given them. Their recent publications show that their mission is antagonistic to parents and American ideals. See page x and xi of their book about global, online Competency-Based Education and see what they say about American parents.

Utah’s System of Higher Education Partnered with the CCSSO to align K-12 and Higher Ed to Common Core:

July 19, 2016: Utah’s System of Higher Education reported that Utah has partnered with the CCSSO, and other Common Core creators, to “improve teacher preparation for K-20 schools”—with the new guidance from President Obama’s Every Student Succeeds Act (ESSA):

The idea of creating massive personal profiles on students’ values, attitudes and behaviors is supported by a Bill Gates’ funded project at Arizona State University through a computer-adaptive learning platform called Knewton:

Knewton’s founder claims that their learning and assessment platforms can collect “5 to 10 million actionable data per student per day” as part of “personalizing learning.”

Arizona State University and Global Silicon Advisors (ASU+GSV) hosted an Ed Tech Summit at Utah’s Grand America. Many progressive leaders behind Common Core spoke, as did many prominent Utahns. GSV Advisor’s wants to use Common Core to globalize online curriculum and assessments within the next 10 years—finally allowing the global elite to eliminate local school boards:

Trump’s US Education Secretary spoke to ASU+GSV Summit leaders as if they represent parents and local education control:

The elite groups behind Common Core have been open about their desires to use online curriculum and assessments to eliminate local education control:

Fordham has taken funding from the Gates’ Foundation (the largest funder of Common Core).
https://edexcellence.net/commentary/education-gadfly-weekly/2012/april-26/overcoming-the-obstacles-to-digital-learning-1.html

“The Common Core Standards, and the rethinking of assessments that they are fostering, provide an opportunity to challenge [the] deeply held belief in local control.”

In 2011, Jeb Bush and Bob Wise published an oped in Utah’s Deseret News about how Utah was implementing all of their digital learning policies:

The CCSSO and the Obama administration’s US Department of Education developed Common Core’s Common Education Data Standards (CEDS) so that global elites could profit from gathering private information about student’s values, attitudes and behaviors in the “new global economy”. Massive dossiers on students from cradle to career will create their new “goldmine”:


Parents should know how to protect their children’s private learning information from both third-party curriculum and assessment providers and states and districts. Here is an excellent resource, the PARENT TOOLKIT:

4 thoughts on “Governor Keep Your Promise”