Diane Ravitch posted the very disturbing story about the boy in Florida who was on his death bed and state officials made him take a Common Core assessment test. Lawmakers moved to pass “Ethan’s Law” to prevent such horrific nonsense, but then dropped it and just added some general accountability language elsewhere.

Why did they do this? The feds stepped in and said if more than 1% of disabled children opted out of the test Florida would be in violation of federal law.

What is happening in America?

Diane Ravitch also agrees with the Cato Institute that the Obama administration is using Common Core to nationalize education, stating:

“I appreciate the necessity of a vigorous federal government that provides a safety net and protects the neediest. However, I don’t appreciate the federal government doing what is clearly illegal, that is, controlling, directing, and supervising curriculum and instruction via the Common Core standards. Although its supporters, including President Obama and Secretary Duncan, repeat that its development was “state-led,” that was a deception. Bill gates funded them because the Feds were barred from doing so, but the Feds funded the tests that will control curriculum and instruction. There has been no louder cheerleader than Duncan.”

Recently, a student in New York was suspended from school for 2 days. Her crime? Telling fellow students they could opt-out of their Common Core tests.

Meanwhile in Long Island, over 20,000 parents have opted their children out of Common Core tests.

What is happening to America? Someone sent me a link to a Cato Institute report showing each state’s adjusted performance on the SAT test and the dollars being spent in education. Look at Utah’s terrible track record and yet we constantly hear from educrats how we need more money in education. 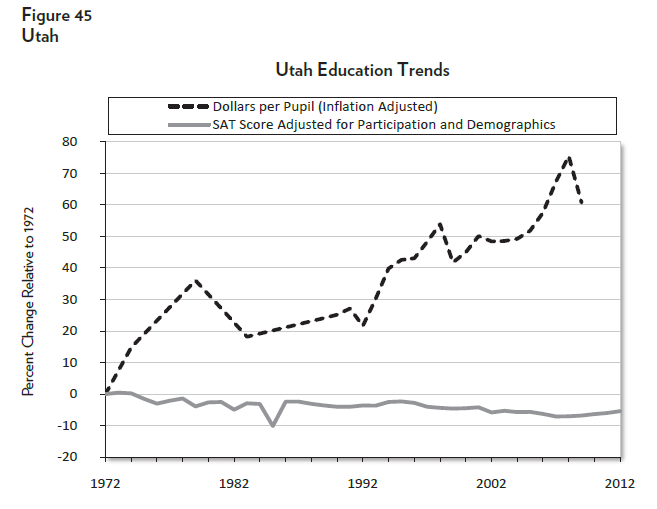 Why do we continue to have such issues all across America? What has happened over this time span?

There are many factors, but not least of which is the amount of pressure being put on students to do better and better and to treat them like widgets on an assembly line. “If we can just put this knowledge into their heads at this age, they’ll turn out better prepared for college and a career.” Really? I doubt it. Admittedly, I was no stellar example of doing well in school when I was a child. I was pretty average. I loved math, and hated English and social studies. I wanted to be a pilot but turned out to be an accountant…by choice in the end, but I wish I’d had greater freedom in my own educational experience and been able to explore things I wanted to, rather than have people direct my schedule and learning sequence for me.

I have been fighting the education establishment for 10 years now. 10 years ago it started in Alpine School District when they quit teaching the times tables and long division to children under Investigations math. Yes, you read that correctly. For at least 3 straight years this happened and I have personally spoken with teachers who had their contracts threatened, one teacher who lost his job over it, and numerous teachers who confided in me that they used to shut their doors to teach the times tables to children. It was insane.

Fast forward several years and I was trying to find philosophical solutions. Connor Boyack one day mentioned he had a copy of “Teach the Children, an Agency Approach to Education” by Neil Flinders. I obtained a copy of the book through Amazon and contacted Neil. We held a strategic conference and invited people from all over Utah to come participate in something unique…namely, the creation of core principles that should drive education.

These are the principles we developed.

Common Core clearly violates items 1, 4, and 5. I do not believe we will ever see significant educational and behavioral improvement no matter how much money is spent, unless we return to these core principles and respect students and parents in ways that Common Core will never do.

You can learn more about agency-based education from our website. There are a number of videos from past conferences which you can watch and in the coming days, more will be published and this movement will continue to grow. I invite you to get on the mailing list there (very low volume) to stay in touch with what’s happening.

6 thoughts on “Feds Threaten Florida and Returning to Proper Principles”