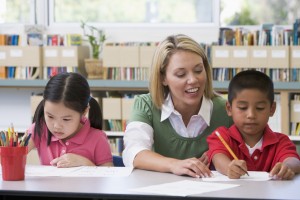 Teachers, you know what you hold in your hands when children enter your classroom. You become their heroes, mentors, friends, and one of the greatest influences of their lives. Your influence spans generations. The positive things you do stick with students forever. Unfortunately, the negative things do as well. Your influence is so strong, it can even divide families. There are those in positions of power who have strongly influenced the design of the education system to intentionally bring this about. I write this post to let teachers know that they have precious cargo in their hands and are accountable to the highest degree because they can shape the world view of children in ways that few understand. I also write it as a warning to parents on what they must constantly guard for. The terrorist Bill Ayers understood this power and when he discovered blowing up buildings wasn’t getting him very far, he went into teaching to shape minds.

“I walked out of jail and into my first teaching position—and from that day until this I’ve thought of myself as a teacher, but I’ve also understood teaching as a project intimately connected with social justice.” -Bill Ayers at the World Education Forum in Caracas, Venezuela in front of Pres. Hugo Chavez

I will now illustrate the power of a teacher with two stories from parents I recently received.

“My third grader came home talking about who created the telephone and that his teacher, who I really like, was kind of sad and told the kids the phone was created for lazy people because no one wanted to write. I kept telling my son that is not correct and must have been joking. But my child kept saying “But my teacher said…” Drove me crazy to the point I had to snap at my child :( “No, your teacher is wrong!!”

After I calmed down I explained to him that I feel his teacher is wrong and that his teacher’s statement was one of a personal opinion, and then had to explain how people feel differently about issues by using books and movies as examples. This teacher is in reality amazing and I admire him. I think I was mostly shocked because of how much we have enjoyed him. But it’s so easy for kids to take the word of the teacher over the parent and if the teacher isn’t careful there are damaging effects that can come from this.” -Heidi

“What else are they teaching our kids without parents knowing? My 2nd grader was told that George Washington was not a Christian by 3 separate teachers before I pulled her out to homeschool. She would not believe me when I dictated inspirational quotes to her from his writings. She said, “But mom! How could he have said ANY of these things? He wasn’t even Christian!” After I got over the shock, it took me over an hour and many original documents to counteract something that she had learned at school. It was months later and because of a simple assignment that I found out. Otherwise, she would have kept this in her head and added to it with other teachers telling her similar things.” – Susie Schnell

With at least two of our own children, we can recall times they have come home with something they heard their teacher say at school which was incorrect and they would not believe us for the longest time. I don’t know if you’ve experienced this, but teachers have such high trust from our children, it can be quite dangerous to fully trust everything that a teacher might say to your children. I believe every parent needs to sit down and warn your children not to believe everything their teachers tell them, particularly when teachers don’t always know the truth for themselves and often just repeat what is written in the curriculum they use.

Now let me turn your attention to the education system and how it creates a wedge between parent and child…by design.

Years ago when I was fighting Investigations math, I was shocked at how the U.S. National Science Foundation could endorse constructivist math programs when they’d be proven to be utter failures by massive studies like Project Follow Through (http://oaknorton.com/imathresults34.cfm). It baffled my mind at how some teachers and administrators could think that not teaching children the times tables and long division was going to help them prepare for upper math where instantaneous mental math of basic facts was a critical tool in seeing relationships in equations.

I kept asking myself why anyone would want to use a math program that confused children AND their parents, who often were unable to help their children with their homework.

Around this time, I discovered two things.

The first was that John Goodlad was BYU’s Education Department consultant and he was an anti-family, atheist, socialist, humanist. Among the things he taught in his writings are:

“Public education has served as a check on the power of parents, and this is another powerful reason for maintaining it.”
– John Goodlad, Developing Democratic Character in the Young, pg. 165

“Parents do not own their children. They have no ‘natural right’ to control their education fully.”
– John Goodlad / Developing Democratic Character in the Young, pg. 164

“Most youth still hold the same values of their parents… if we do not alter this pattern, if we don’t resocialize, our system will decay.”
– John Goodlad, Schooling for the Future, Issue #9, 1971

“Enlightened social engineering is required to face situations that demand global action now… Parents and the general public must be reached also, otherwise, children and youth enrolled in globally oriented programs may find themselves in conflict with values assumed in the home. And then the educational institution frequently comes under scrutiny and must pull back.” – Dr. John I. Goodlad, “Guide to Getting Out Your Message,” National Education Goals Panel Community Action Toolkit: A Do-It-Yourself Kit for Education Renewal (September 1994); 6

Why BYU’s Education Department chose Goodlad as their consultant is still somewhat of a mystery except that he was a prominent national educator who perhaps through some flattery influenced some to join him in his quest. When confronted about this, BYU Education Department and local school district administrators say, “well, we don’t believe everything he says.” No, but by closely working with him you provide him enormous klout and cause people in your sphere of influence to think you agree with everything he does. Goodlad was also the man that Charlotte Iserbyt, Reagan’s senior education policy advisor, called “America’s premier change agent” in her book “The Deliberate Dumbing Down of America.”

The second thing I discovered was a light bulb moment for me. The Anchorage School District in Alaska had adopted the constructivist program “Everyday Math,” and an article in the press spoke about the problems parents were having helping their children with their homework. (http://www.ktuu.com/news/ktuu-report-suggests-improvements-for-anchorage-school-district-math-program-20110620,0,7214623.story)

“Both Comeau and Nees say that they’ve heard complaints about the ‘Everyday Math’ program from parents, who say that the method is so different from what they learned in school, that some parents aren’t able to help their children with their homework.

WHOA!!! The reason for completely changing the way math has always been taught wasn’t about finding a better way to teach math (because it clearly wasn’t). It was a way to break up the family. If mom and dad learned traditional math which was efficient, these social reformers needed to replace that with something that would confuse parents to the point of frustration so that children couldn’t get help from them and would learn to recognize teachers as their ultimate authority figures. “Never mind mom, I’ll just ask the teacher tomorrow.” Heard that one before?

Teachers, I want you to know that we love you and appreciate all the positive things you do for children. But also please realize the awesome responsibility you have in playing a secondary and supportive role to parents. You know you are not the primary caregivers who are responsible for the thoughts, attitudes, behaviors, and beliefs of a child, in spite of what you might be trained to think you’re supposed to do in those areas. Parents have the natural, sovereign right to fully direct the education and upbringing of their children. You need to respect parents’ desires. They want to help their children, but Common Core (particularly math) in many instances is destructive of building positive relationships between parent and child. And when you as a teacher introduce topics that are inappropriate and interfere (and I’ve heard quite a number of instances of subversive teaching), you are in the wrong. When you teach critical thinking, it shouldn’t be from the perspective of a strong vs. a weak argument, it should be put right to the sources and then compare the arguments. Put the Communist Manifesto right next to the US Constitution and help students understand the magnificence of the Constitution.

Parents, ultimately the responsibility rests on you and me. We have to know what’s happening in the classroom better than ever. Talk with your children that sometimes teachers make mistakes and if they ever feel like something wasn’t presented fairly or made them feel uncomfortable, they need to come to you to help them get clarity. In a sense, you have to damage your child’s trust in their teachers early on, because you don’t know what that teacher is going to teach YOUR child. This is what you are up against:

“Every child in America entering school at the age of five is insane because he comes to school with certain allegiances to our founding fathers, toward our elected officials, toward his parents, toward a belief in a supernatural being, and toward the sovereignty of this nation as a separate entity. It’s up to you as teachers to make all these sick children well – by creating the international child of the future.”

“…a student attains ‘higher order thinking’ when he no longer believes in right or wrong. A large part of what we call good teaching is a teacher´s ability to obtain affective objectives by challenging the student’s fixed beliefs. …a large part of what we call teaching is that the teacher should be able to use education to reorganize a child’s thoughts, attitudes, and feelings.”

Benjamin Bloom, psychologist and educational theorist, in “Major Categories in the Taxonomy of Educational Objectives”, p. 185, 1956

I’m not necessarily saying these things are prevalent all throughout Utah schools, but the people who are highly regarded and wield vast influence in the education systems of our nation, are definitely making efforts to implement this agenda.

In closing, I invite all of you, but particularly teachers, to ponder the 5 principles outlined at www.agencybasededucation.org. I believe these are the 5 principles that every school board member and teacher and administrator should wholeheartedly support.

We hear criticism of the government bailouts because legislators and executives said some companies were too big to fail and had to be rescued. However, legislators are largely unwilling to let go of control in education and bring back true local control to schools for fear that some will fail.

When parents and teachers work together for the benefit of a child, there will be no failures. That child will feel more important than ever. If you want to strengthen education, strengthen the home.

However, the forced application of a single path of education for all students is guaranteed to destroy the liberty of this nation. After all, how can we expect the youth we denied educational liberty to, to be empowered with wisdom born of that same liberty, to protect our Constitution? Freedom begets freedom.