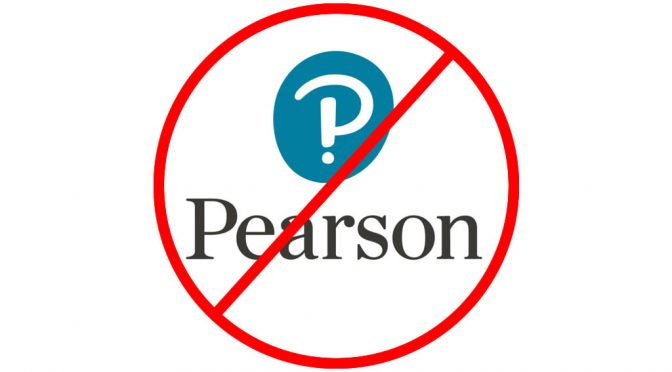 Pearson has made out very well as a provider of education services for many decades, but none like the decade of Common Core. Pearson was involved in the very beginning of the process as one of the players who knew what was happening. It allowed them to produce curricula that matched the standards right out of the gate when the standards were released. States were then bribed to immediately adopt the standards before most publishers could provide reworked curriculum, so districts and schools turned to what was available (Pearson and a couple other major players) to buy their materials. This resulted in hundreds of small education companies being put out of business, unable to afford to rework their curriculum in time without early access to the Common Core standards.

The purpose of this short post isn’t to expose all of Pearson’s connections. That can be dug up elsewhere. I just want to point out a couple things.

First is this one I learned this past week. President Obama directed $350 million to Pearson to create Common Core texts (I think this article I’m linking to should have said tests because the PARCC test was Pearson’s and there was a $350 million grant for CC tests which largely went to Pearson and SBAC which makes me wonder slightly how they arrived at their information). Here’s the new twist though: Pearson gave President Obama a $65 million book deal through their subsidiary Penguin Random House. Quid pro quo anyone? https://www.investmentwatchblog.com/obama-gave-pearson-publishing-350-million-to-create-commoncore-text-and-pearson-gave-obama-a-65-million-dollar-book-deal-in-return/

Second, a couple years ago, Dr. Duke Pesta presented at a special event in Salt Lake City. I posted the video recording to Youtube and it’s had nearly 10,000 views at this point. If you haven’t watched it, here’s your chance. It’s excellent.

This past week, a former employee of Pearson posted a comment on the video. It’s what we already knew. Pearson’s massively profitable testing arm is pure crap. Trying to grade hundreds of thousands or millions of tests in giant batches is impossible. They don’t even try.

I worked for Pearson several years ago “grading” high school student essays. Essay graders were broken up into teams of 7 people in a room of 300 people, morning and afternoon shifts, sitting in front of a computer terminal. We were instructed to grade an essay as it appeared on computer screen in less then 5-minutes as Dr. Duke stated, and we were told not to take into consideration grammar, spelling, and cohesiveness of the essays. My team consisted of four high school teachers and three college educated individuals who were not teachers. Pearson’s goal was to grade every essay with a score of 3 or above on a 5 point-scale. Our team was constantly discussing the madness of the work and having confrontations with the supervisors and management team. Thank goodness it was just a temporary job for 3-months, but it was excruciating to see the bad grammar, spelling mistakes, and unintelligible thoughts of those kids.

There is ZERO benefit to students taking these tests. What good is a test without feedback so you can improve, and what good is a score if it’s arbitrary and meaningless? Pearson’s massive hold on states needs to be sliced free and terminated. Schools and districts should bring testing back to the local level so teachers craft a well thought out test, grade it, return it to students for feedback, and in turn give parents something they can tangibly discuss with their children to help them in whatever way they deem appropriate.

Can any legislator or member of the state board of education or other educator justify this? You’re WASTING OUR TAX DOLLARS. Why? Is it to say, “we test our students?” That’s a load of crap. You’re indoctrinating and psychologically harming them and should be held accountable for SAGE and Aspire and all the other idiotic standardized tests you’re foisting on our children. You are creating unhealthy stress in children all over this state.

Lastly, I want to point out that Pearson has been caught with it’s pants down knowingly indoctrinating our children through their curricula. Project Veritas got some of the big wigs on hidden camera denigrating the constitution and Christianity and how they put that into their texts unbeknownst to parents. Their goal is to make money and change American culture and they’re doing that through their powerful governmental connections and education industry dominance. Watch it here: https://www.projectveritas.com/tag/pearson/

Utah schools, districts, and the state should completely cut ties with this anti-American, anti-education behemoth. Restore local control and pass the savings from this garbage back into teachers salaries. Eliminating these garbage tests and could provide every Utah teacher with a nice pay increase.

One thought on “Why do States and Schools Pay for this Cr@p from Pearson?”