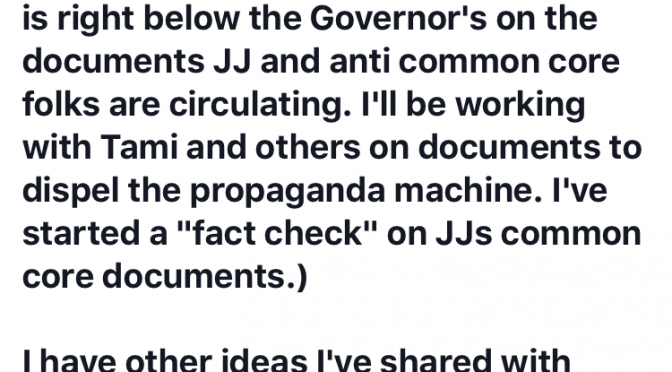 At last Saturday’s state GOP convention, we saw Jonathan Johnson beat out Governor Herbert, 55-45 among delegates. Not enough to hit the 60% threshold and prevent a primary election, but then again the Governor collected signatures to be on the primary ballot regardless of the outcome of the convention/caucus system. These nearly 4,000 individuals from around the state spent many hours over a course of a few weeks vetting these and other candidates to understand their policies and records. In my estimation, there were three main reasons that delegates chose to #HireJJ.

Well, plus the governor has 26 years in politics as a career politician. That’s long enough for anyone to lose touch…

While working the UACC booth during the convention, I was approached by a lady who began to challenge some of the things we were stating about the Governor’s involvement in Common Core. She soon identified herself as Mary Shumway, the wife of former state superintendent Larry Shumway, and as she says below, a former USOE employee. When she was done arguing a few points, she said she had my email address and would send me some information to enlighten me about where we are wrong.

A couple days after the convention ended, someone sent me a few screenshots from a Facebook group where Mary had posted these comments. 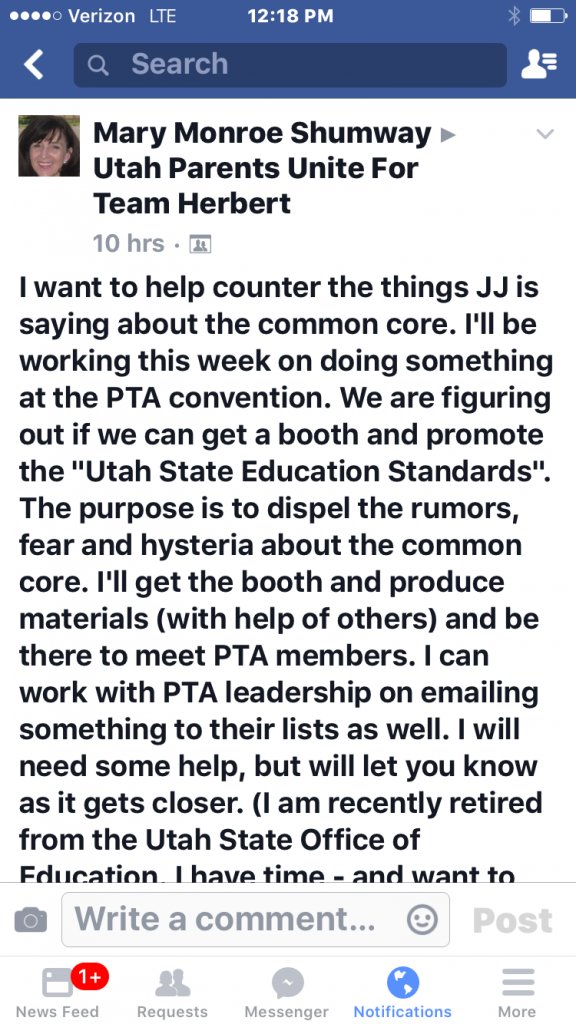 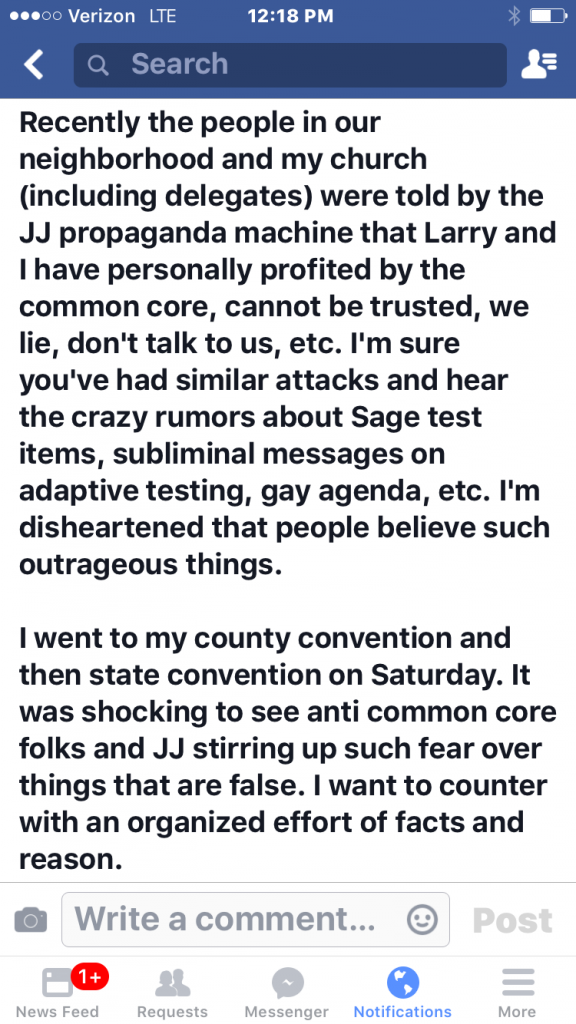 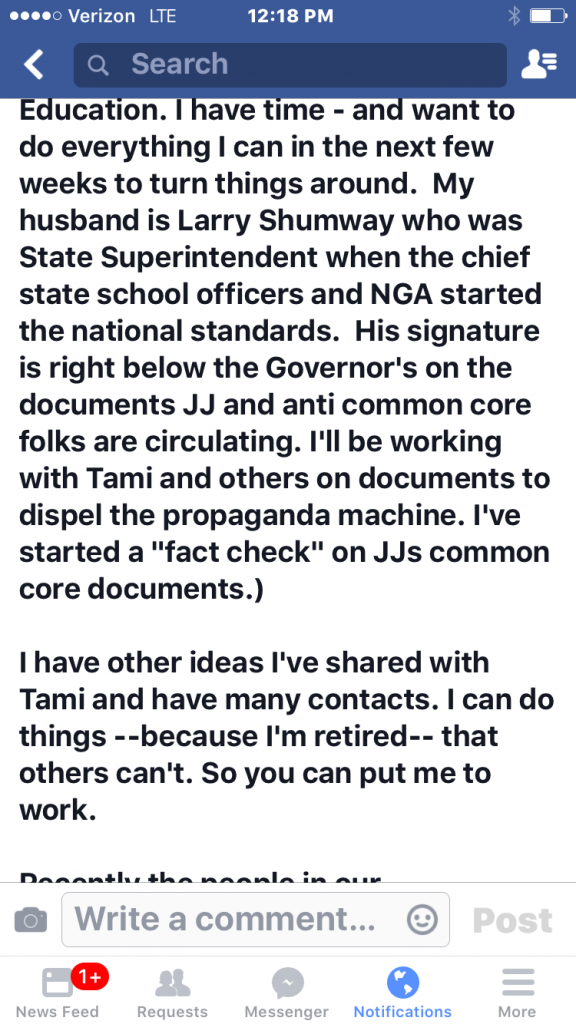 I would like to help Mary with her efforts on fact checking as well as offer this advice.

PTA is a great avenue for you to push this message, particularly since Bill Gates gave national PTA a million dollars to push Common Core around the country. Pocket change in exchange for the blind support of their organization. Actually, national PTA’s support for big government solutions isn’t blind, it’s fully complicit.

For Mary’s benefit, I have now checked with Jonathan Johnson and his campaign manager. Neither one of them have ever heard of Larry or Mary Shumway so they are completely baffled how their “machine” is attacking them. I can’t speak for Mary and what she claims to have heard, but it doesn’t appear to be coming from #HireJJ’s campaign.

Mary also said people are saying she can’t be trusted, they lie, and not to talk to them. At the convention Mary seemed to blame me for this, not Jonathan Johnson’s campaign. She said there are people at her church that don’t talk to her.

If any of the readers of this article have been less than kind to someone who believes with all their heart that Common Core is the silver bullet Utah needs, just stop. You can point out facts and disagree, but we don’t have to be mean-spirited about it. Leave that for the the other side who despises that we are growing.

So lets get started on some facts…

On Saturday, Mary appeared highly offended that we had published a flier showing four documents where Governor Herbert signed us onto the federal reforms we call Common Core.  Her main point seemed to be that the documents he signed didn’t actually obligate us, because we didn’t actually receive Race to the Top money. When I asked if we had implemented each point of the agenda, she agreed that we did fully implement Common Core, the assessments, the data collection, redistribution of teachers, turnaround experts, etc…  The point is that we jumped into the Common Core because of the chance that Utah might receive some of the millions of dollars the Race to the Top promised.  After Utah realized it hadn’t won that money, it could have pulled out of Common Core, but it did not.  If you listen to the State School Board Audio minutes, there was literally joking going on that this was really a “race to the money”.  Federal money, not proven education reform, was the motivation from day one, regardless of whether Utah got financially rewarded for joining Common Core.

Touchdown for the feds getting states to spend billions of dollars to implement something they weren’t “obligated” to do. How many normal people would purchase a truck at a car dealership if the salesman said, “hey, if you buy this truck right now, you’ll be entered into a drawing to get it for free!“? That is essentially what Utah did.

Utah did get $9.6 million from the feds to set up the SLDS (Statewide Longitudinal Database System, known as P20W) through the 2009 State Fiscal Stabilization Fund (SFSF) application . Then, on Utah’s Race to the Top documents, we kept filing “assurances” with the feds that we were fully implementing Common Core (standards, assessments, interoperable database, redistribution of teachers, turnaround experts, etc…). It was a great way for them to keep us advancing the agenda without having received any money. Even our ESEA waiver continued the pattern. How much money has the federal government given Utah through ARRA, and other fiscal stimulus packages? $741 million per Arne Duncan’s announcement in 2010, including money tied to the SFSF where we made assurances to the feds.

For those interested in the facts, here’s what Utah included on page 87 of our application to join the SBAC (Smarter Balanced Assessment Consortia) which shows the August 10, 2010 State School Board meeting minutes and contains this paragraph. That was the school board meeting when we finalized adoption of Common Core. Looks to me like we adopted the standards “as written.”

Pg. 91 from the same application:

Further, when Governor Herbert was telling everyone we didn’t have Common Core, we had Utah Core, I confirmed with Superintendent Menlove that in fact we did have Common Core for math and ELA.

Mary stated that we made changes to the standards when we adopted them, but that is incorrect. The board was correct above in stating we were adopting them “as written.”

If you click the link to the Menlove article and go down to the comments, you will find one from Randall Lund that states he wanted to compare Common Core and the Utah core standards for ELA and math to know for himself if they were identical. He did a line by line comparison and he stated:

1. The standards in the two documents are exactly word for word identical, right down to the footnotes. Nothing was added, deleted, or modified.

There is more to Randall’s comment there if you wish to read it.

This only makes sense. It was well known nationally that to participate in SBAC a state had to be on the Common Core standards “as written,” otherwise how could a common assessment be created for all the states in the consortium? When we succeeded in getting Utah out of SBAC, I got an email from Ze’ev Wurman, former Bush education advisor, where he stated:

“Congratulations to Utah!!! The first domino to fall from the Common Core bandwagon! Not only will Utah be able to offer extra 15%, but it can shift content across grades. It can even — perish the thought — offer authentic algebra in eighth grade!”

At this point it was possible for Utah to make changes to the standards and recently the state has modified some number of standards, but not when we adopted them.

Too bad Utah doesn’t offer authentic algebra in eighth grade by default. Under our current “integrated method” of Common Core adoption, most kids don’t complete algebra till 9th grade, while California children were having massive success getting students proficient in algebra by 8th grade. So naturally like any government bureaucracy, CA switched to Common Core from something that was working well in an effort to try and get Race to the Top funds…

I would invite Mary and others to watch this excellent presentation by Dr. Duke Pesta. It will help dispel the notion that Common Core was state led. He plays actual video segments of David Coleman talking about the creation of Common Core, how Bill Gates funded it and said we won’t know for a decade if Common Core even works and how aligning the standards and assessments mean curriculum will also align bringing the whole system into convergence. Stop taking my word for it and listen to the creators say it themselves. 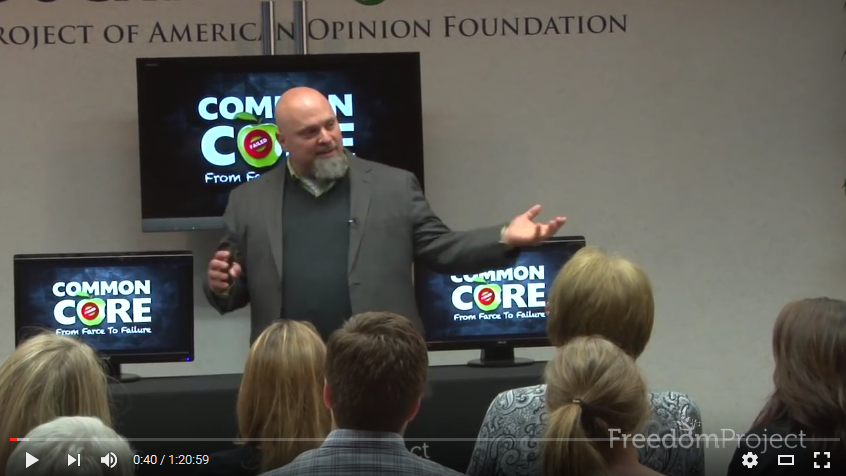 Oh, also check out this Washington Post article by Lindsey Layton on the Gates/Coleman/Wilhoit collaboration to create Common Core. It’s got lots of facts as well.