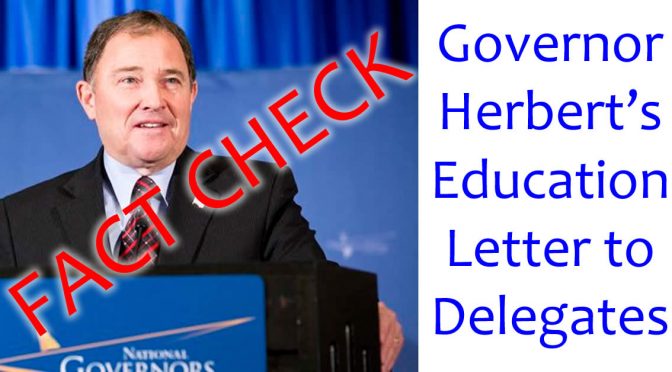 Ed. Note: Those who are serving as state delegates have received no less than five communications in the past week from Governor Herbert related to Common Core where he asserts that he is opposed to Common Core. Anyone who believes this is either unaware of the past six years of history or willfully closing their eyes and sticking their head in the ground. Just today I received a robocall from the Lt. Governor, Spencer Cox, in which he states Governor Herbert has “fought against federal control of education including Common Core.” What respect I had for the Lt. Governor has been dramatically reduced.  What follows below is a rebuttal by Alyson Williams of the letter delegates received from Governor Herbert.

Don’t miss the other article exposing how involved Governor Herbert has been in promoting Common Core.

In a letter to State delegates dated April 7, 2016, Governor Herbert listed seven points, concluding with a personal note, to clarify his position on Common Core in Utah. A fact check against other sources follows each excerpted point below:

1) I have called for the elimination of the federal Department of Education.

TRUE (but don’t miss the fine print): While the topic didn’t come up in his remarks to Congress, he did say there should not be a federal Department of Education on his Facebook page:

Now for the fine print, here are his remarks to Congress: http://blog.governor.utah.gov/wp-content/uploads/2016/02/Written-Testimony-of-Governor-Gary-Herbert-UT-Sen-HELP-02-23-16-FINAL-1.pdf

In short, the Governor outlines how instead of the Federal Department of Education controlling nationwide policies for education, Governors should collude to set nationwide policy for education. Calling for the elimination of the Department of Ed while advocating for an extragovernmental process to accomplish a different centralization of power is not a principle of constitutional federalism. It is a Constitution work around.

2) I signed into law SB287 – a bill that makes it illegal for the federal government to have any control.

FALSE: No law in our state makes it “illegal” for the federal government to have “any control.” 2012 SB287 (http://le.utah.gov/~2012/bills/static/SB0287.html) began as a list of conditions under which Utah “shall exit” any federal education agreement. However, by the time it reached the Governor’s pen, it said, “may exit.” The degree to which Utah avoids federal parameters over local education policy is dependent on the people we elect to various positions of authority and whether they will take action not because they “shall” but because they “may” do so.  Governor Herbert has taken great pains to emphasize Utah’s legal authority to take an alternative path to Common Core and yet he has not advocated doing it. As the chair of the National Governor’s Association, a key stakeholder in the Common Core State Standards Initiative, he accepted a nationally prominent role in promoting these reforms.

3) I called for Attorney General Sean Reyes to conduct an exhaustive investigation to determine whether or not the state of Utah had ceded authority over our education system to the federal government on Common Core or any other standards. He concluded that Utah has not. We control our standards, our curriculum, our textbooks and our testing.

FALSE: Herbert did ask AG Sean Reyes to conduct an investigation but within carefully selected parameters, not an “exhaustive” one. The report provided legal justification for whether Utah could join or exit Common Core while avoiding a conversation Utahans can’t seem to have with this Governor about whether Utah should have joined or would exit Common Core.

As far as ceding authority to the federal government, the AG report acknowledges “the USDOE, by imposing those waiver conditions, has infringed upon state and local authority over public education. States have consented to the infringement, through federal coercion…”

A full response to this report by a Utah teacher can be found here: https://whatiscommoncore.wordpress.com/2014/10/28/responding-to-the-attorney-generals-report-on-common-core/

4) I commissioned Utah Valley University President Matt Holland and a group of experts to review our education standards. With over 7,000 public comments, this committee recommended improvements to standards and the state board has implemented many of these proposed changes.

UNDISCLOSED BIAS:  Throughout his campaign, Governor Herbert has referred to his Common Core review commission using only Matt Holland’s recognizable name, leaving out that the original chair, Rich Kendell (eventual co-chair with Holland), was an advisor for Prosperity 2020 and Education First. Prosperity 2020 Chair Allan Hall was also on the commission as was Rob Brems, a member of the Utah Data Alliance Executive Board. (Common standards are an invaluable asset for data collection.) All are highly qualified people, who, it must be noted, publicly favored these reforms before this commission was assembled.  There was just one k12 teacher on the commission, from a private school, and she did not concur with the report but her reasons for dissent are not specifically listed.

In another example of this one-sided approach, the report references two experts who came to Utah to testify about the quality of the Standards but does not disclose their previous connection to the Common Core State Standards Initiative. Timothy Shanahan from the University of Chicago was on the writing committee for the standards, and David Pearson from UC Berkeley was on the Common Core Standards validation committee. Both have published works and give seminars to help teachers implement Common Core around the country.  The concerns of the dissenting members of the Common Core validation committee who have also submitted testimony in Utah were never mentioned.

LIMITATIONS ON PUBLIC COMMENT: Public comment was limited to making suggestions standard by standard and not on the overall scope and sequence of the framework, or on things that are absent from the standards.

NO MEANINGFUL REVISIONS: As far as proposed changes coming from the report, there is a list of changes to the standards, but they are all corrections of typographical errors or clarifications of the wording.  (p. 33) Other less specific recommendations are scattered throughout, but are seemingly limited to organizational considerations like better cross-referencing between the standards and supporting materials with no substantive revisions.

Perhaps the most illuminating aspect of the report is this statement that is repeated several times regarding the natural limitation to making meaningful changes to standards that are intended, as a priority, to be common across the U.S.:

“The Utah Core Standards can be revised and improved over time in accordance with Utah students’ needs and based on sound research, while staying similar enough to other states to assist transferability at grade level.”

UNKNOWN OUTCOMES: This is immediately followed by the observation that we won’t truly know how college readiness will be impacted until we see how the kids who have been through Common Core get to college – underlining one of the biggest concerns of parents, that this is a statewide (nationwide) experiment on a scale that will reduce alternatives and inhibit the innovation driven by competing ideas. This experiment will affect an entire generation of Utah students but we can only hypothesize about the outcome: “Research on students who complete all of the grade levels of the mathematics standards will be required to verify that the standards (and their effective implementation) make a difference.” (p.28)

A link to the report: http://www.utah.gov/governor/docs/utahcorestandards/Standards_Review_Panel_Report_to_the_Governor.FINAL.2.5.15.pdf

5) I, and others, successfully lobbied Congress to repeal the No Child Left Behind Act and return education authority to the states. This policy change was heralded by the Wall Street Journal as the “largest devolution of federal control to the states in a quarter-century.”

FALSE: ESSA didn’t repeal “No Child Left Behind,” it reauthorized it. NCLB is just a nickname for one of the previous reauthorizations of the Elementary and Secondary Education Act that has been due for reauthorization since 2007. This reauthorization was dubbed the “Every Student Succeeds Act.” It was revised to eliminate one of the most unpopular aspects of NCLB, the penalties for not meeting targets for AYP, but put nearly everything that had been pushed in the federal grants and waivers under Obama’s Department of Education into federal statute. Obama’s Secretary of Education said everything his administration had “promoted and proposed forever” is embedded in ESSA: http://truthinamericaneducation.com/elementary-and-secondary-education-act/arne-duncan-essa-embodies-the-core-of-our-agenda/

Here’s a letter sent to Utah’s Congressional delegation from a group of local parents highlighting a few of their concerns with ESSA: https://whatiscommoncore.wordpress.com/2015/12/02/letter-to-congress-and-compiled-notes-from-alyson-williams-and-50-citizen-readers-on-esea-every-student-succeeds-act/

Every member of Utah’s Congressional delegation, with the exception of Senator Hatch, voted against ESSA.

6) Assessing the progress of our students is important, but we want to maximize the time they spend learning, not the time they spend taking tests. This session, I worked with the Legislature and signed two bills into law that reduce high-stakes testing in our schools (SAGE testing).

TRUE-ish: Governor Herbert did sign the bill removing the high stakes for SAGE assessments from teacher evaluations and another bill that makes the SAGE test optional for 11th graders (who would likely be taking a different standardized test for college application purposes.) It is not clear how either of those reduce testing unless, in the first case, it is assumed that teachers will require less test practice if their evaluation isn’t directly impacted. In the second case, it’s likely just making room for a different high-stakes test.

7) Every budgetary proposal and policy decision I make is to give more authority and discretion to local school districts and local schools. I have continually advocated for increases to funding that gets to the classroom and can be tailored for local needs.

FALSE: Not every policy proposal. Much of the Governor’s Excellence in Education plan dating back to 2010 and the associated calls for additional funding have been in the context of his Education 2020 plan to expand state educational policy to include early childhood education (preschool, all day kindergarten), workforce alignment initiatives, data collection, and school and teacher accountability which is money for bureaucracy and additional programs, not an increase for the average classroom. He did call for additional $ to go into the WPU in his 2017 budget.

On a personal note, I have eleven grandchildren in Utah public schools. I’ve seen the frustration they and their parents have had over math assignments they didn’t understand and teachers struggled to teach. I have expressed my dissatisfaction with the flawed implementation of new standards, especially in math…

NOTE: It seems too common that when a top-down program fails it is blamed on the “implementation.” This is a key reason for true local control and for programs to be initiated at the level where the expertise, resources and student needs are best understood. Teachers should not be scapegoats for programs chosen by politicians.