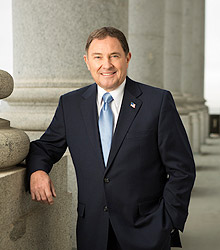 With Jonathan Johnson defeating Governor Herbert at the GOP convention 55%-45%, largely influenced by Common Core issues, the Governor no doubt had an awakening. I have never doubted the Governor’s intentions to provide a quality education to Utah children, but I still find this move politically opportunistic to try and salvage his chances of being re-elected. Of course, the Governor can make this call knowing he has no authority to actually carry it out. That belongs to the state board…

Having had several discussions with Jonathan Johnson, I know he is fully committed to principles of local control that I’m not sure the governor is committed to at the same level based on his letter. His letter brings out some positives for sure, but I believe it’s time LEA’s (Local Education Agency) had much greater control over their financing, standards, assessments, data collection and privacy, and the state shrunk back in it’s role interfering with local education (and of course the feds are cut out of the picture completely).

In essence, here is what the Governor said:

-Common Core had a poor implementation (Oak: this is the go-to excuse for all failure programs like Investigations math)

-Naturally, he said there is misinformation on the subject, but added for what I think is the first time, that there are legitimate concerns.

-He asks the state board to change out the standards and keep these three principles in mind:
–Maintain high standards in all subject areas
–Keep the feds out of education decisions
–Preserve local control of curriculum, testing, data collection, and instructional practices.

-Make the process public (not something that happened the first time)

-There are shortcomings to the one-size-fits-all approach. We need standards that are flexible to allow a wide variety of curricular decisions by individual school districts.

-“I have eleven grandchildren in Utah public schools. I have seen firsthand the frustration they and their parents have had over an assignment they did not understand and that teachers struggled to teach.”

No doubt this will be nationwide news that Utah’s Governor who has been one of the biggest proponents of Common Core, now wants out. That’s helpful for the entire movement across the country and for that, I’m grateful.

To see the near immediate response of the state board (ie. at least some of the knew this was happening and prepared this response), click here.