A couple years ago, Investor’s Business Daily ran this graphic in a story entitled Education vs. Bureaucracy. 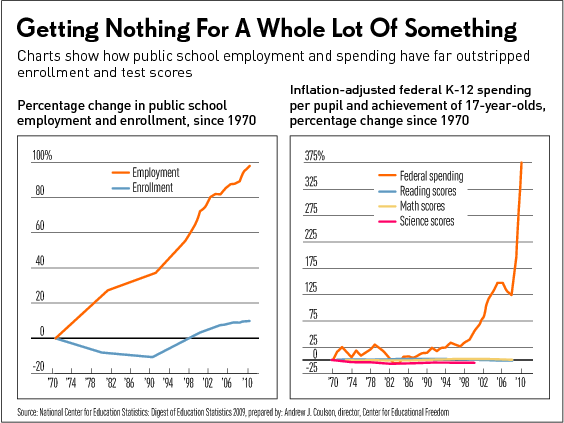 Both graphs tell a different but parallel story. In our race to accommodate the cries of “we need more funding” and “we need smaller classes,” (which largely came from the unions), legislators and chief executives raced to show that they are pro-education by funneling more and more money into the bureaucracy. Employment rates skyrocketed. Federal spending shot up in our “Race to Do Something.” In the end, what benefit did we actually see? Nothing changed. In fact, in spite of massive increases in employment and spending, class sizes barely nudged downward. Most jobs have expanded the bureaucracy for educrats doing research into what doesn’t work, and then justifying their jobs by pushing that into the classrooms.

The more top heavy a structure is, the more prone it is to fraud and waste because it is removed from the people impacted by their decisions. I’m 100% more careful with my money, than the federal government cares about the few thousand dollars I “voluntarily” give them. The same is true within state spending. At the local level, when you have money given directly to a school, they are going to be far more careful with those funds, than if that money is administered at the district or state level. It’s just common sense. What if legislators restored true local control of education where dollars would actually be more wisely spent?

An idea that isn’t working well

In Utah, we have something called School Community Councils (SCC). It’s comprised of a few parents who are elected by other parents in the school. A note is sent home by the school announcing the running, and the parents whose children remember to hand it to them have the opportunity to run in the election. The school then sends home ballots, and if your child remembers to give it to you, you can vote for other parents in the school that you think would do a good job on the council. In addition, the principal and a couple of teachers serve on the SCC, but state law mandates there must be more parents on the committee.

The intent of SCC’s is to work on school improvement programs. In reality, that happens very little. In Utah, schools have land trust money that may be a few thousand dollars, reaching into the low 5 figures. If my recollection is right, when I was on the local SCC, we had about $30,000 a year to allocate toward improving the school. It was a joke. We met 4 times during the year to discuss some things and the main thing we did was to allocate these funds. It went like this:

Principal: “OK, here’s the report with this year’s funding amount. What we did last year was spent $x thousands on teacher supplies because the teachers don’t have enough money for classroom supplies. We spent $Y on this activity for the kids which is a tradition at the school, and we spent $Z on textbook replacements and supplements that aren’t covered by other funds. I really think these things are important. Do you want to change anything or do what we did last year?”

Do SCC’s do other stuff? Yes, they can work on improving schools, but their power is really diminished.

What if we tried real local control?

What if instead of these weak SCC’s, we actually had a local school board at each school that was elected in real elections. For example, Charter Schools in Utah act as their own school districts. Instead of having a district school board above them, parents are elected to those boards and make decisions for the school and set policy just as a school district board does for all the schools in a district. Charter schools still lack the ability for real local control, but they do have greater autonomy than a district school.

With local elections, instead of a board of 7 parents looking over 81 schools (like in Alpine School District…and other large districts), that same board of several parents now looks over 1 school. Now you’ll find a board member in your neighborhood, probably just down the street, who you can share your concerns and ideas with that have real impact for your child.

What if each school’s elected board hired the principal instead of the district? The principal would then be accountable to the parents in the local community, instead of playing politics for his/her job with district bureaucrats.

What if instead of the state funding the state office of education and passing dollars down to district offices to take their cut and then pay for things in the schools, it was reversed. Take all the funding for education in Utah, divide by the number of students, and send it directly to the local schools based on enrollment figures. Then let those school boards determine how to best use those dollars at their school based on their budget. They could then determine salaries, curriculum materials, and purchase services from the district and state offices of education as needed. If the district provides a valuable service that enhances the education taking place in the classroom, then the school board would be inclined to purchase that service. If the state office of education provided a valuable service for the school, such as a state test that the school wanted to participate in to see how their children compare to other schools, then the school could pay for that service. Local budgets would give far more freedom and creativity to solving local problems at the school. Teacher salaries could see an increase as bureaucracy bloat found ways to slim down and provide only the needed services for the schools. Economies of scale could still easily be maintained in the same way schools run book orders for students. There’s a deadline and everyone purchasing from a given publisher can get bulk pricing.

Local school boards at the school level would also have the freedom to try things that aren’t being done at other district schools.

They would be free to attract students from other neighborhoods who have an interest in something this particular school offers like a special language class or something.

They would be free to give latitude to teachers to teach to the student’s interests, instead of teaching to the high-stakes standardized tests.

They would be free to adopt higher standards than the minimums offered by the state and not worry about the consequences of standardized testing.

They would be free to alert parents to the fact that their program is higher than the state’s minimum standards, and perhaps because it’s not in the same exact sequence as the state standards, their children might not do as well on standardized tests as other children, but that in the end, their children would actually come out far ahead.

They would be able to more closely listen to parent’s concerns about curriculum, teachers, or the principal, and make local decisions regarding real issues impacting the school.

As it is now, nothing will ever change. Everyone who thinks pumping more money into the same model of education will solve problems is insane by definition. Real structural changes must happen or nothing will ever change. No parent ever demanded from legislators that their child be given high stakes adaptive testing in the classroom and put into a database so they can have their personal information tracked over time to tell them what job they should go into. But in an effort to show accountability for dollars spent, legislators have put the imposing structure into place. It’s time we tried freedom in education. It’s time we restored real local control.

2 thoughts on “Getting Nothing for a Whole Lot of Something”