The article below is reprinted with permission from:

Wendy Hart is a school board member in Alpine School District. Wendy is an awesome board member who studies the laws and understands proper principles like schools exist to serve families. Here’s an FAQ on SAGE tests that she’s written up.

SAGE Testing 2015: What You Need to Know

SAGE testing has begun in Alpine School District this week.  It will continue off and on through May.  The subjects being tested by SAGE are: Reading, Writing, Math, and Science.  Because of concerns about SAGE testing, we have seen legislation, directives, forms, meetings, etc.  I hope to help you make sense of it all.  The most important thing to remember throughout this is that, as noted in state law, “A student’s parent or guardian is the primary person responsible for the education of the student, and the state is in a secondary and supportive role to the parent or guardian.”

First, the only thing required for opting out is written notification from you, the parent.  You don’t need a particular form to comply with the legal requirements for opting out.  Most districts, including Alpine, have a form and they will want you to sign it.  You are not legally required to sign it.  I would recommend that if you bring in your own letter, please do not have the principal sign something.  You just need to communicate your wishes to the school.  For the record, I have been opting my kids out of state testing since 2012.  If you want to know more about why, please go here. More information can be found on the SAGE FAQ page.

Second, teachers and schools will NOT be penalized for students who are opted out.  Last year, the law changed specifically stating “neither an LEA nor its employees are negatively impacted through school grading or employee evaluation due to a student not taking a test”. Prior to the passage of this law (the bill # was SB122), the State Office of Education (USOE) was penalizing teachers, schools, and students by giving students who opted out of end-of-year testing a 1 (the lowest possible score) to be used in calculating teacher and school grades.  Parents, while always having the right to opt kids out, were concerned about the consequences to teachers and to schools.  Since the legislature passed the laws that require school and teacher grading, it was their responsibility to fix the law to make sure schools and teachers were not penalized for parental actions on this level.  The law did not grant parents the right to opt out, it merely clarified that they did have the right and that schools and teachers would not be ‘negatively impacted’.  There are still many teachers who believe that they will be punished if you opt your kids out of testing.  Please make sure to let them know about the law.  The law was changed before teacher and school grades were calculated last year, so teachers have not been negatively impacted from kids opting out of SAGE testing*.

Third, the USOE has a contract with our testing vendor.  Where in this contract does it say what the testing vendor is prohibited from doing with our children’s data?  I haven’t found it.

The actual contract with American Institutes for Research (AIR), our testing vendor for SAGE, is a Purchase Order that references their original bid for services.  Essentially, the contract is the bid.  You can find a copy of the bid here.   I have asked many people to indicate where in the bid we are assured that AIR will not be using behavioral questions and what prohibitions exist on them with regard to how they may use our children’s data. Most responses are, “It’s in the contract.”  Because of parental concerns, last year, the State Board of Ed signed an addendum to our agreement with AIR, wherein, AIR specifically says they will not share personal data with any third-parties unless the USOE gives them permission.  Better, but not good enough.  The USOE also received a letter from AIR’s Executive Vice-President, indicating that they will not be using behavioral indicators or sharing of student data.  Again, nice, but why not put it in a legally-binding document?

In our August Board Meeting (52 minutes into the Board Meeting**), Board Member Brian Halladay, who has been doing extensive research on AIR, listed over 20 entities that are subsidiary organizations of AIR.  Subsidiary organizations, by definition, are not third-parties.  That means these organizations are not prohibited from receiving or using our children’s data that is obtained through SAGE testing.  In response to the concerns raised in that meeting, the Superintendent conversed with USOE Assistant Superintendent in charge of testing, Dr. Judy Park.  Dr. Park and AIR Executive VP, Jon Cohen, responded to these concerns here and here.  Dr. Park provided citations from the contract where data privacy is discussed.  Unfortunately, those citations don’t really deal with prohibitions on AIR.  Three of us on the board (Mr. Halladay, Mrs. Hill, and myself) responded to Dr. Park.  You may read our letter here.  In the letter, we raise additional concerns and also request validity and reliability information on the SAGE tests.  The sections of the contract cited by Dr. Park do not prohibit AIR’s usage of our children’s data.  The response we received was that legal counsel would be consulted.  That was in September.  We have not heard anything since.

Fourth, it is important that you know SAGE includes not just the end-of-year, or summative, testing.  SAGE also includes interim and formative testing.

The districts and schools can decide to implement interim testing, which is a similar version of the summative testing.  Like the summative tests, the questions and answers are not seen by the teachers and cannot be released to the public.  The teachers do see scores, as well as information about individual standards and/or objectives and how individual students scored in those areas.

The formative tests, on the other hand, are tests or assignments that are generated or selected by the individual teachers.  The teachers can selected items from within the SAGE test databank or they can create them, themselves.  Teachers create, select, see, and determine the scoring for the formative tests.  For more information on formative testing, this YouTube video is very helpful.  Former director of testing at the USOE, John Jesse,  indicated that they wanted to put everything into SAGE so that teachers would have no need of any additional testing program.  The upside to teachers is evident.  The upside to AIR? Lots more data.  Even though the teachers create the items, the items, the answers, and your student’s responses are collected and stored by the SAGE software on AIR-maintained servers.  So the lack of data privacy extends to not just the once-a-year tests, but to every activity that your kids participate in while logged on to the SAGE portal. It’s a goldmine for our friendly behavioral research organization, AIR.

Finally, on Feb. 2, 2015, the USOE sent a memo to all districts and charter schools stating that parents have no options for opting out of SAGE interim or formative testing.  As a board, we had been debating back and forth about the interim and formative testing, and the district form was stated as covering all interim and summative SAGE testing.  Dr. Henshaw indicated that parents should contact individual teachers to have their children excused from formative tests.  With the advent of the USOE memo, interim and formative testing have now been deemed as ‘required.’  (Since interim testing is over for this year, it will not impact students in Alpine until next year.)  The problem with this is that this wasn’t a directive from the State Board of Education.  It wasn’t a change in the law.  This was a memo from two state administrators by-passing every elected official in any capacity and indicating that parents have ‘no option’.  Parents are now subject to the state for what goes on with their children.  The state law could be interpreted as being silent on interim and formative testing.  But being silent isn’t the same as forbidding a particular action.  In a free society, the limitations are placed on government to protect individual rights.  The USOE memo places restrictions on parents.  In short, the state compels you to send your children to school.  If you choose to avail yourself of the free, public education system provided by the State of Utah, you are obligated to pay for that, not just with your taxes, but with your children’s personal data.  You have ‘no options’ to protect them.  The Wise and Powerful Oz, um I mean, State Office of Education, has spoken. 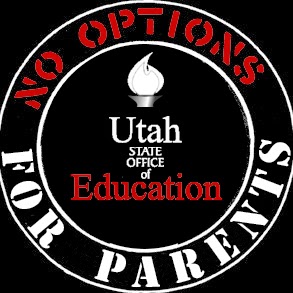 So, what do you do?  Don’t give up.  Push back.  Civil disobedience is a time-honored tradition in America.  If you don’t want your kids taking the SAGE tests, make sure your teachers and principals know.  They are caught between a rock and a hard place.  Be empathetic, kind, and firm: your child will not be participating.  If they are asked to participate, your child has been instructed to answer incorrectly and/or to call you to pick them up.  Write letters to the State Board of Education (board@schools.utah.gov), and to your legislators, and the governor.  Let your locally-elected board members know of your concerns.  Local boards can communicate on your behalf, but we still have to administer the tests.  Be kind, but firm.  And, at the end of the day, do what is best for your kids. As we concluded in our letter to Dr. Park, “Just because parents choose to educate their children in our public school system, it does not mean that we, as a state government, are entitled to whatever information about their children we feel is necessary.”

*There is an argument to be made that only the most involved parents are opting their kids out.  Since we know that the most involved parents usually have the kids who score the highest on standardized testing, there is a potential for a lower score due to that dynamic.  However, there are also many parents of special ed kids who are opting out because they find the tests problematic for their kids.  At the end of the day, the problem is the entire method of grading teachers and schools based on standardized tests.  Contact your legislators and ask them to remove school and teacher grading from state law.

**Board Meeting Audio:
1. Click on the link
2. Scroll Down to ‘Additional Media’ and expand
3. Click on either the Study Session or Board Meeting audio, as listed.

2 thoughts on “ASD Board Member Wendy Hart on SAGE Tests”