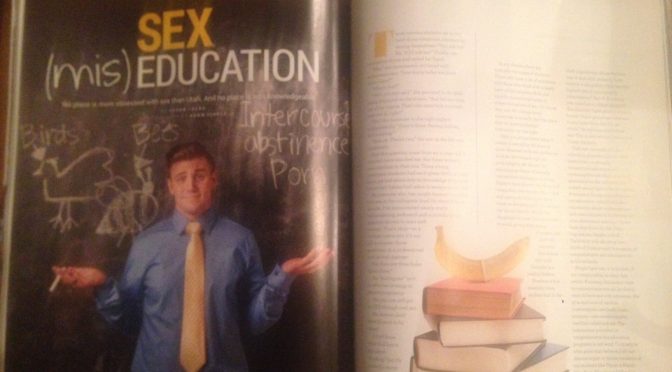 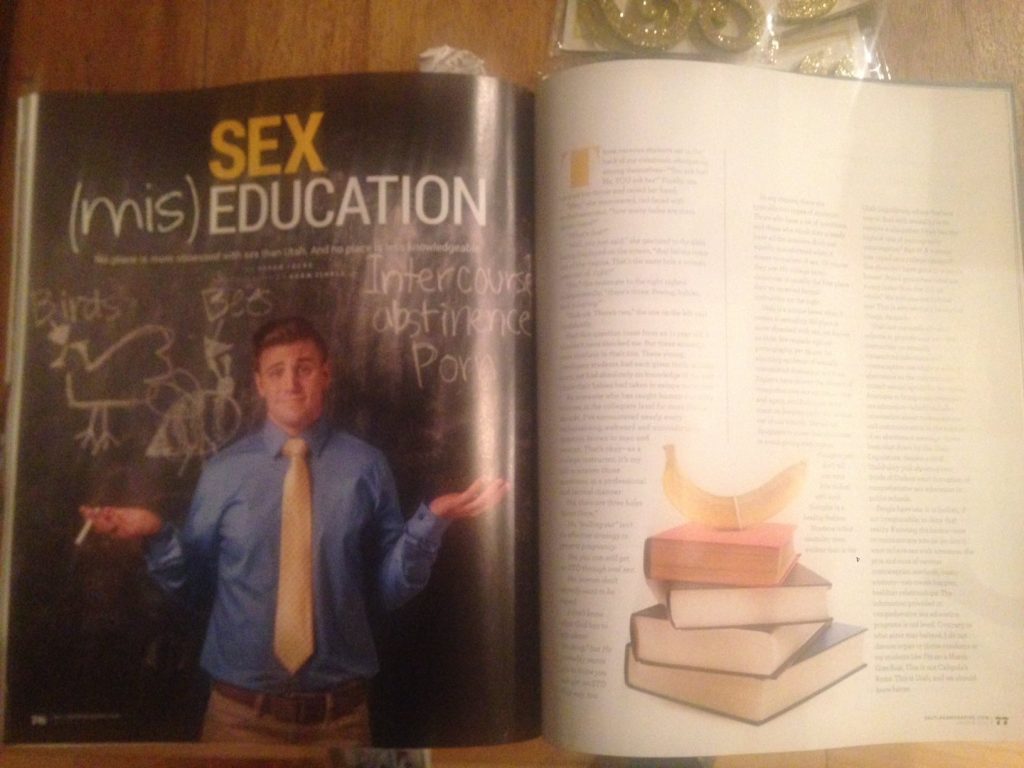 Something we should all be concerned about is the level of sexual information dispensed by the education system without parental consent or knowledge.

A few years back, we learned that the Obama administration was giving $75 million a year to Planned Parenthood to deliver comprehensive sexuality education. What are they teaching? Basically that no kind of sex is wrong, and the only “unsafe” sex is becoming pregnant. From their teaching guide:

‘Abstinence, means choosing not to do any sexual activity that carries a risk for pregnancy or STD/HIV,

We know that employees of Planned Parenthood worked on the Common Core National Sexuality Standards which moves their “education” agenda into elementary school to Kindergarten ages. Utah hasn’t adopted these yet to my knowledge, but no doubt there are those who want it implemented.

JaKell Sullivan recently received a copy of Salt Lake Magazine in which an article appeared, written by Susan Lacke, entitled, “Sex (Mis)Education.” JaKell posted this comment and quote from the article.

Our legislators will get hit hard this legislative session with the argument that we must implement Comprehensive Sexuality Education (CSE = Common Core-aligned global/national standards and curriculum teaching a perverted view of human sexuality) in order to fight the pornography epidemic. See this from Salt Lake magazine’s 6-Page article promoting CSE, and make sure your legislators are aware of this tactic.

“It’s hard to fight a public health crisis when we’re not sure exactly what it is. Besides, how would we fight it? Even Gov. Herbert admits the public health crisis declaration is symbolic: Herbert says it’s a step to let “our young people know that there’s a particularly psychological and physiological detriment that comes from addiction to pornography.”

…”There is little legal recourse to actually limit access to sexual imagery–the Internet will always be available on phones or laptops. Victoria’s Secret catalogues will always be in the mail. Reality TV will always have hookups and breakups and one-night stands. Dirty pictures will always be on Twitter.

Republican Sen. Todd Weiler, who sponsored the declaration, emphatically declared “no boy or girl needs to see those images to learn how families are created.” But they’re seeing them anyway. What’s more, boys and girls are actually seeking out those very images, despite being told not to. What other choice does a curious kid have?

One reply to her post by Rhonda Hair is what triggered my desire to create this post. It’s a quote from C.S. Lewis. Always brilliant, Lewis tears this old argument to shreds.

Here is good food for thought – turns out that C.S. Lewis addressed this very claim in “Mere Christianity”, chapter 5. Hopefully here’s enough to leave you wanting to study the whole chapter:

“Everyone knows that the sexual appetite, like our other appetites, grows by indulgence. Starving men may think much about food, but so do gluttons; the gorged, as well as the famished, like titillations.

“You find very few people who want to eat things that really are not food or to do other things with food instead of eating it. In other words, perversions of the food appetite are rare. But perversions of the sex instinct are numerous, hard to cure, and frightful. I am sorry to have to go into all these details, but I must. The reason why I must is that you and I, for the last twenty years, have been fed all day long on good solid lies about sex. We have been told, till one is sick of hearing it, that sexual desire is in the same state as any of our other natural desires and that if only we abandon the silly old Victorian idea of hushing it up, everything in the garden will be lovely. It is not true. The moment you look at the facts, and away from the propaganda, you see that it is not.
They tell you sex has become a mess because it was hushed up. But for the last twenty years it has not been hushed up. It has been chattered about all day long. Yet it is still in a mess. If hushing up had been the cause of the trouble, ventilation would have set it right. But it has not. I think it is the other way round. I think the human race originally hushed it up because it had become such a mess. Modern people are always saying, “Sex is nothing to be ashamed of.” They may mean two things. They may mean “There is nothing to be ashamed of in the fact that the human race reproduces itself in a certain way, nor in the fact that it gives pleasure.” If they mean that, they are right. Christianity says the same. It is not the thing, nor the pleasure, that is the trouble. The old Christian teachers said that if man had never fallen, sexual pleasure, instead of being less than it is now, would actually have been greater. I know some muddle-headed Christians have talked as if Christianity thought that sex, or the body, or pleasure, were bad in themselves. But they were wrong. Christianity is almost the only one of the great religions which thoroughly approves of the body-which believes that matter is good, that God Himself once took on a human body, that some kind of body is going to be given to us even in Heaven and is going to be an essential part of our happiness, our beauty, and our energy. Christianity has glorified marriage more than any other religion: and nearly all the greatest love poetry in the world has been produced by Christians. If anyone says that sex, in itself, is bad, Christianity contradicts him at once. But, of course, when people say, “Sex is nothing to be ashamed of,” they may mean “the state into which the sexual instinct has now got is nothing to be ashamed of.”
If they mean that, I think they are wrong. I think it is everything to be ashamed of. There is nothing to be ashamed of in enjoying your food: there would be everything to be ashamed of if half the world made food the main interest of their lives and spent their time looking at pictures of food and dribbling and smacking their lips.

“…In the first place our warped natures, the devils who tempt us, and all the contemporary propaganda for lust, combine to make us feel that the desires we are resisting are so “natural,” so “healthy,” and so reasonable, that it is almost perverse and abnormal to resist them. Poster after poster, film after film, novel after novel, associate the idea of sexual indulgence with the ideas of health, normality, youth, frankness, and good humour. Now this association is a lie. Like all powerful lies, it is based on a truth-the truth, acknowledged above, that sex in itself (apart from the excesses and obsessions that have grown round it) is “normal” and “healthy,” and all the rest of it. The lie consists in the suggestion that any sexual act to which you are tempted at the moment is also healthy and normal. Now this, on any conceivable view, and quite apart from Christianity, must be nonsense. Surrender to all our desires obviously leads to impotence, disease, jealousies, lies, concealment, and everything that is the reverse of health, good humour, and frankness. For any happiness, even in this world, quite a lot of restraint is going to be necessary; so the claim made by every desire, when it is strong, to be healthy and reasonable, counts for nothing. Every sane and civilised man must have some set of principles by which he chooses to reject some of his desires and to permit others.”