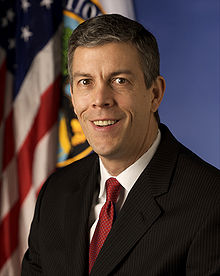 Think the feds aren’t using Common Core to take over education and database tracking of our children? Here’s the proof from the horse’s mouth.

Seems pretty clear that the goal is to have the data collected by the federal government. Here’s 3 disturbing quotes.

“This is one of the significant problems of NCLB. It let every state set its own bar and we now have 50 states, 50 different states all measuring success differently, and that’s starting to change. We want to flip that. We want to set a high bar for the entire country against states’ and districts’ ability to create and hit that higher bar, give them the chance to innovate and hold them accountable for results.”

2) “Hopefully, some day, we can track children from preschool to high school and from high school to college and college to career. We must track high growth children in classrooms to their great teachers and great teachers to their schools of education.” (this was Marc Tucker’s plan in the early 90’s to nationalize education with a cradle to grave database)

3) “Hopefully, one day we can look a child in the eye at the age of eight or nine or 10 and say, “You are on track to be accepted and to succeed in a competitive university and, if you keep working hard, you will absolutely get there.” (What are they going to say to the other kids? “Sorry you’re not cutting it”?)


Sec. Duncan’s address to UNESCO on 4 Nov. 2010 regarding education reform including implementation of CC in America.
http://unesco.usmission.gov/duncan-remarks.html

As I read through this speech, there were a few things in particular that I have reservations with, besides the fact that our Sec. of Ed praises UNESCO and wants to work directly with them in our education efforts in America. In our meeting with the governor last month, Lt. Gov. Bell stated, “if Common Core has Obama’s name on it, we want to run the other way.”   Well, it seems that it has Obama’s name all over it.

I want to highlight a few excerpts from his speech that were of particular interest to me as a citizen, teacher, and parent.

“Our goal for the coming year will be to work closely with global partners, including UNESCO, to promote qualitative improvements and system strengthening.”  (don’t forget the Gates Foundation signed a contract with UNESCO in 2004 to create a global education system with them and has since plunged over $100 million into Common Core development and promotion)

“The President’s aims are far more ambitious. He wants to improve teacher evaluation in order to dramatically elevate the status of the teaching profession itself;”  (Sounds like the President thinks it’s part of his executive role to be involved in the evaluation process for teachers.   Is this even constitutional?  This is offensive to me as a teacher and a parent.  What business does the federal government have evaluating teachers, unless of course they are employed by them.  Is that the direction we are heading?  Doesn’t sound like local control and we don’t have to study history too much to know the danger in having centralized control and the power of decisions resting in the hands of a few.)

“The North Star guiding the alignment of our cradle-to-career education agenda is President Obama’s goal that America will once again have the highest proportion of college graduates in the world.”  (This is the Outcome Based Education nonsense that has been done in the past. Common Core is the center piece of bringing this together)

“Traditionally, the federal government in the U.S. has had a limited role in education policy.  The Obama administration has sought to fundamentally shift the federal role, so that the Department is doing much more to support reform and innovation in states, districts, and local communities.“  (Sounds like a federal take-over of education in America!)

“In March of 2009, President Obama called on the nation’s governors and state school chiefs to “develop standards and assessments that don’t simply measure whether students can fill in a bubble on a test, but whether they possess 21st century skills like problem-solving and critical thinking and entrepreneurship and creativity.”  (So, was this really state-led or was the President involved in orchestrating the meeting in Apr. 2009 in Chicago?  Would that mean that the federal government did play a role in the development of the standards?)

“Virtually everyone thought the President was dreaming.

But today, 37 states and the District of Columbia have already chosen to adopt the new state-crafted Common Core standards in math and English. Not studying it, not thinking about it, not issuing white paper, they have actually done it. (Why is it that people keep denying the feds are using Common Core to take over education? It’s all out in plain sight.)

Over three-fourths of all U.S. public school students now reside in states that have voluntarily adopted higher, common college-ready standards that are internationally benchmarked. That is an absolute game-changer in a system which until now set 50 different goalposts for success.” (FYI, Common Core standards were never internationally benchmarked.)


The second game-changer is that states have banded together in large consortia to develop a new generation of assessments aligned with the states’ Common Core standards.

In September I announced the results of the department’s $350 million [dollar] Race to the Top assessment completion to design this next generation of assessments. (So Mr. Duncan admits the feds are funding the assessments but in the prior sentence says the states banded together to develop them. 100% false. They were federally funded.)


Two state consortiums, which together cover 44 states and the District of Columbia, won awards. These new assessments will have much in common with the first-rate assessments now used in many high-performing countries outside the U.S.”