No more decisions behind closed doors!  Let’s get everyone talking about Common Core.

In the spring of 2011 I received a receipt for the sale of my children.  It came in the form of a flyer that simply notified me that my state and thereby my children’s school would comply with the Common Core. No  other details of the transaction were included. The transaction was  complete, and I had no say. In fact, it was the very first time I’d  heard about it.

I know what you’re thinking. That’s outrageous! Common  Core has nothing to do with selling things, especially not children!

Okay, so the idea that the State School Board and Governor who’d made this  decision could be described as “selling” my children is hyperbole. It is an exaggeration intended to convey an emotion regarding who, in this land of the free, has ultimate authority over decisions that directly affect my children’s  intellectual development, privacy, and future opportunities. It is not even an accurate representation  of my initial reaction to the flyer. I say it to make a point  that I didn’t realize until much, much later… this isn’t just an issue of education, but of money and control. Please allow me to explain.

That first day my husband picked up the flyer and asked me, “What is Common Core?” To be honest, I had no idea. We looked it up online.  We read that they were standards for each grade that would be consistent across a number of states. They were described as higher standards, internationally benchmarked, state-led, and inclusive of parent and teacher in-put. It didn’t sound like a bad thing, but why hadn’t we ever heard about it before? Again, did I miss the parent in-put meeting or questionnaire… the vote in our legislature? Who from my state had helped to write the standards? In consideration of the decades of disagreement on education trends that I’ve observed regarding education, how in the world did that many states settle all their differences enough to agree on the same standards? It must have taken years, right? How could I have missed it?

At first it was really difficult to get answers to all my questions. I started by asking the people who were in charge of implementing the standards at the school district office, and later talked with my representative on the local school board. I made phone calls and I went to public meetings. We talked a lot about the standards themselves. No one seemed to know the answers to, or wanted to talk about my questions about how the decision was made, the cost, or how it influenced my ability as a parent to advocate for my children regarding curriculum. I even had the chance to ask the Governor himself at a couple of local political meetings. I was always given a similar response. It usually went something like this:

Question: “How much will this cost?”

Answer: “These are really good standards.”

Question: “I read that the Algebra that was offered in 8th grade, will now not be offered until 9th grade. How is this a higher standard?”

Answer: “These are better standards. They go deeper into concepts.”

Question: “Was there a public meeting that I missed?”

Answer: “You should really read the standards. This is a good thing.”

Question: “Isn’t it against the Constitution and the law of the land to have a national curriculum under the control of the federal government?’

Answer: “Don’t you want your kids to have the best curriculum?”

It got to the point where I felt like I was talking to Jedi masters who, instead of actually answering my questions, would wave their hand in my face and say, “You will like these standards.”

I stopped asking. I started reading.

I learned a lot.

I learned that most other parents didn’t know what the Common Core was either.

I learned that the standards were state accepted, but definitely not “state led.”

I learned that the international benchmark claim is a pretty shaky one and doesn’t mean they are better than or even equal to international standards that are considered high.

I learned that there was NO public input before the standards were adopted. State-level decision makers had very little time themselves and had to agree to them in principle as the actual standards were not yet complete.

I learned that the only content experts on the panel to review the standards had refused to sign off on them, and why they thought the standards were flawed.

I learned that much of the specific standards are not supported by research but are considered experimental.

I learned that in addition to national standards we agreed to new national tests that are funded and controlled by the federal government.

I learned that in my state, a portion of teacher pay is dependent on student test performance.

I learned that not only test scores, but additional personal information about my children and our family would be tracked in a state-wide data collection project for the express purpose of making decisions about their educational path and “aligning” them with the workforce.

I learned that there are fields for tracking home-schooled children in this database too.

I learned that the first step toward getting pre-school age children into this data project is currently underway with new legislation that would start a new state preschool program.

I learned that this data project was federally funded with a stipulation that it be compatible with other state’s data projects. Wouldn’t this feature create a de facto national database of children?

I learned that my parental rights to deny the collection of this data or restrict who has access to it have been changed at the federal level through executive regulation, not the legislative process.

I learned that these rights as protected under state law are currently under review and could also be changed.

I learned that the financing, writing, evaluation, and promotion of the standards had all been done by non-governmental special interest groups with a common agenda.

I learned that their agenda was in direct conflict with what I consider to be the best interests of my children, my family, and even my country.

Yes, I had concerns about the standards themselves, but suddenly that issue seemed small in comparison to the legal, financial, constitutional and representative issues hiding behind the standards and any good intentions to improve the educational experience of my children.

If it was really about the best standards, why did we adopt them before they were even written?

If they are so wonderful that all, or even a majority of parents would jump for joy to have them implemented, why wasn’t there any forum for parental input?

What about the part where I said I felt my children had been sold? I learned that the U.S. market for education is one of the most lucrative – bigger than energy or technology by one account – especially in light of these new national standards that not only create economy of scale for education vendors, but require schools to purchase all new materials, tests and related technology. Almost everything the schools had was suddenly outdated.

When I discovered that the vendors with the biggest market share and in the position to profit the most from this new regulation had actually helped write or finance the standards, the mama bear inside me ROARED!

Could it be that the new standards had more to do with profit than what was best for students? Good thing for their shareholders they were able to avoid a messy process involving parents or their legislative representatives.

As I kept note of the vast sums of money exchanging hands in connection with these standards with none of it going to address the critical needs of my local school – I felt cheated.

When I was told that the end would justify the means, that it was for the common good of our children and our society, and to sit back and trust that they had my children’s best interests at heart – they lost my trust.

As I listened to the Governor and education policy makers on a state and national level speak about my children and their education in terms of tracking, alignment, workforce, and human capital – I was offended.

When I was told that this is a done deal, and there was nothing as a parent or citizen that I could do about it – I was motivated.

Finally, I learned one more very important thing. I am not the only one who feels this way. Across the nation parents grandparents and other concerned citizens are educating themselves, sharing what they have learned and coming together. The problem is, it is not happening fast enough. Digging through all the evidence, as I have done, takes a lot of time – far more time than the most people are able to spend. In order to help, I summarized what I thought was some of the most important information into a flowchart so that others could see at a glance what I was talking about.

I am not asking you to take my word for it. I want people to check the references and question the sources. I am not asking for a vote or for money. I don’t expect everyone to agree with me. I do believe with all my heart that a decision that affects the children of almost every state in the country should not be made without a much broader discussion, validated research, and much greater input from parents and citizens than it was originally afforded.

No more decisions behind closed doors! Let’s get everyone talking about Common Core. 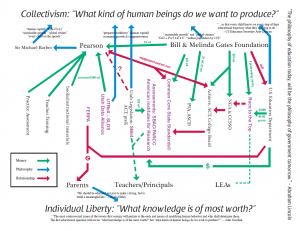 Thanks to Alyson Williams for permission to publish her story.

This was first posted at Common Core:  Education Without Representation.

23 thoughts on “Children for Sale”